Creation of the World: The Hindu Genesis of Origin of Life

Creation of the World Exemplify Purpose of our Existence

When we seek help from the mythological perceptions, because Science has not yet found the right answer for creation of the world, we tend to look towards the Natural Power which has been extensively been talked about in Indian ‘Puranas’ and ‘Upanishads’ and then we stop at the gate of the supreme creator of the universe ‘Brahma’.

The story about the Creator or the super soul and the creations and the soul begins and stops with some what the mention about one Supreme Brahma.

There is only one Akshara Brahma as well. But the- souls are innumerable.

It is told that though bliss is not the intrinsic quality of a Soul, it possesses the other two qualities like those of the Supreme Being, viz. eternal existence and consciousness.

The Atma is capable of associating itself with Paramatma. In the association of Paramatma the soul’s consciousness increases infinitely and at the same time, it is a supreme bliss of the almighty ‘He’.

A soul is always a soul it never becomes Brahma.

A piece of iron fallen in fire becomes red and starts glowing like it. But soon as it is taken out of the fire, it gradually loses its qualities of fire and becomes an iron piece again.

When it wishes to enjoy worldly pleasures, it acquires a subtle body, which enters into the mother’s womb through male and female union and comes out in the manifested world in a gross body contributing as a part of the creation of the world.

Creation of the World as in the Upanishads & modern Physics:

The aim of creation is to give a chance to all the souls to become human beings and then to realize God Who is an absolute Bliss.

They can realize God by doing absolute good actions and surrendering to Him.

Souls are unlimited in number and are in an infinitesimal ‘life’ form, having a subtle mind of their own. When they receive human body during the creation they do good or bad actions according to the discrimination of their own mind.

The record of these actions called the sanskaras or the karmas, are stored in a section of the mind.

The consequences of these karmas have to be fructified otherwise there would be no meaning of classifying them as good or bad, and they do fructify.

Thus, these collective karmas are like a subtle semi-dormant ‘force’ which resides in the mind of every soul and become the cause of its next incarnation; and the force of the collective karmas of all the unlimited souls works as one of the causal forces to create the world and maintain the universe. 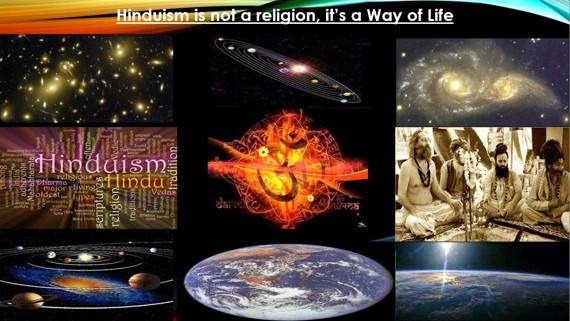 The duration of the existence of the world is countless but not unlimited.

In the no-creation state (called Maha pralaya) the creative energies and the forces remain in an absolutely subtle and dormant state, and in the creation state, they evolve in the form of the universe as we see it today.

There was no beginning of this ‘cycle of creation and Maha Pralaya.’ It is eternal.

Powers involved in the Creation of the World

God inspires the power Maya (the cosmic power in its absolute subtle form) which evolves itself into the form of the universe and the souls begin to reside in the universe in living form.

Thus there are three entities involved in the Creation of the World. They are God, all the souls, and the lifeless Maya.

God is almighty and absolute-life-knowledge-Bliss. He is omnipresent in His Divine personal form and has uncountable absolute virtues. Just like, He is all-Gracious, all-beautiful, all-loving, all-charming, all-knowing, all-kind and all-forgiving to whoever takes refuge in Him.

Maya (the cosmic power) is a lifeless miraculous energy or power. It has three characteristics or qualities called Sattva guna, Tamo guna and Rajo guna (pious, evil and selfish; pretty, ugly and normal; and positive, negative and neutral) that appear in every part of its creation. Souls, in the universe, are unlimited and are infinitesimal. They are an unimpeachable part of the creation of the world.

Lifelessness of Maya, and the Life aspect of a Soul

Maya is lifeless, so it is also mindless. Life and mind complement each other. A living being cannot be without a mind and the mental aspect can never exist on its own. So both stay together, never alone or separately.

Here ‘life’ means the living aspect of a being, like a toad, has a life, not a pebble although they may look alike.

Recommended for You:
Sanskritization: The Process Of Change In Indian Society
Sanatana Dharma And Other Religions Of India: An Insight Story

Forces that keep the Universe running

There are two forces that keep the universe running continuously. They are ‘time’ (called the Kal) and ‘karm’ (the accumulative force of the accumulated karmas of all the unlimited souls, as described above).

Time (Kal) factor is not just the elapsed period that we count according to the calendar. Time (Kal) is an eternal energy like Maya which is a strong force that starts the manifestation of the magic attributes (which gradually become the universe), and then it keeps the universe moving forward until Maha pralaya.

But the ‘force of time’ that pushes the universe to move forward is an ‘eternal energy’ that exists side by side with Maya.

Procedure of the Creation of the World and Universe

All the three: souls along with their karmas, Maya, and Kal (time), stay in God in an absolutely subtle form and in an absolutely dormant state during Maha pralaya. They are activated by the will of God. After certain subtle phases of evolution, the first thing that comes into being is the endless empty space.

There are seven phases of extremely subtle manifestations of Maya that had already happened before the ‘space’ came into being.

(2) In the endless space, an unlimited number of pockets of various sizes were created. They became the base of uncountable sub-universes. Within that unimaginably enormous and endless-like looking space, the ninth phase of Maya (called Vayu) was evolved which created a circular movement in the space itself, as if the entire space was in a circular motion from its central point.

(3) Then, all over in that space, sub particles evenly emerged. This was the tenth phase of Mayic manifestation (Agni).

(4) Then the sub particles and the particles annihilated to form hydrogen atoms. This was the eleventh phase of mayic manifestation (apah).

(5) Then gravity began to predominate and the basic structure of uncountable galaxies and their clusters (as scientists know) were gradually formed. This was the twelfth phase.

(6) The ‘already existing motion’ in the space now made it look like the galaxies were moving away from each other. The speed of this motion of the space varied in different areas of this visible universe but with a perfectly controlled synchronization. (The topic of creation is further detailed in “The Divine Vision of Radha Krishna.”)

(7) None of the existing theories so far have been able to create such a model of the universe that could accommodate all the features of the known universe and creation of the world.

But, this knowledge was already incorporated in the Bhagwatam that was produced by Bhagwan Ved Vyas before 3102 BC.

The functioning of a planetary system

The Supreme God Who controls the Creation of the World and the functioning of the entire universe is called Maha Vishnu.

When the galaxies begin to assume their normal shape, at that point Maha Vishnu creates a great number of Divinely celestial spaces in the galaxies and He enters into those spaces.

He then produces one Brahma in each section who controls the creation of the sun and its planetary system.

One planetary system with its celestial abodes is called one Brahmand. In this way, there are a great number of Brahmands in one galaxy. Celestial abodes are invisible as they are in a different space (dimension).

Now we know that the formation of a planetary system is not a coincidental creation of nature as the cosmologists believe, it is a controlled formation.

Souls are already in the universe in their subtle form, a certain (uncountable) number of souls are transferred to each planetary system run by its own Brahma, and then, gradually Brahma produces those souls on the earth planet in their material bodies.

Life on the Earth Planet

After the formation of the earth planet, the ozone layer was formed, oceans began to exist, and the first form of life appeared on the earth planet. The Upanishad says that first, the vegetation appeared.

How The soil itself contains the subtle form of the seeds of all kinds of vegetation, like, grass, plants, shrubs, flowers, and trees of all kinds?

We know that sometimes in the rainy weather a lot of flying insects are formed in the open space.

Later on, small creatures like fish and birds and then big creatures like tigers and elephants etc. are produced. At this time, Brahma produces the souls along with their body.

One thing must be noted here, that souls are eternal and they must have been living in some form prior to this creation before pralaya.

But you don’t have to worry because Brahma is Graced with the Divine intelligence so he never makes such mistakes.

He produces all the souls exactly according to their previous status: grass becomes a grass, frog becomes a frog, lion becomes a lion, the human becomes a human, and so on. So, Brahma produces the first pair of all the creatures big and small on the earth planet. Afterwards, they multiply themselves.

One should not think that how did the animals just appear on the earth planet, or that there may be some kind of evolution process involved in the creation of the world.

The impracticality of the theory of evolution has already been discussed.

The most significant thing is when a Divine personality Brahma who is so powerful, that he creates the whole Brahmand, maintains the entire planetary system and remembers the identity of each and every living being on the earth planet from each and every bacteria to an elephant and all the human beings as well, then there is no reason that he can’t create the bodies of the animals. So he does, and thus, the Creation of the World was done by Brahma.