Who Invented Paper? : History of Paper and Ink in India

Who Invented Paper? Do you know that paper was first invented in India? The age old perception that Paper was invented in China is not true. Find out the real fact?

The popular and the known notion as to Who Invented Paper, points toward the Chinese inventors Cai Lun who lived between 50 and 120 AD. In the kingdom of the Eastern Han Dynasty in Guiyang, his first experiment with paper is established.

Another notion points invention of paper in India.

The established opinion holds that paper – specifically, Kurasani paper – was introduced to India in the eighth century by Arabs who had learnt the art from Chinese prisoners at Samarkand. Another view is of a Nepal-route between the seventh and ninth centuries. All these euphorias about Who Invented Paper is baseless and misinformed.

The TRUTH is the process of manufacturing paper originates from India and it spread world wide from there.

The indigenous methods of paper manufacture in the states of Maharashtra and Bihar were noted by many in the centuries that followed. The question that Who Invented Paper finds its answer right at this place.

If you go back to the history of the procedures of paper manufacturing you will witness you will notice the age old truth.

In the former state, a wooden block was fixed at the centre of an 8-foot diameter shallow well. Over several days, bark, hay, rugs, tents and gunny bags were moistened or soaked as per requirement. These were then placed on the central wood and beaten to a pulp with a beater. This pulp was subsequently placed in lime water (chunamed) reservoirs with a little water, and gum of the babul tree was dissolved into the mixture. Bamboo moulds were inserted and the material that adhered was lifted out and dried to form paper.

In Bihar, the materials were beaten with a wooden instrument called a dhenki, and then bleached, using soda water. The total was washed, next, and the procedure repeated six times. After this, the pulp was placed in a water-containing cistern and well-stirred. An hour later, the material was cut up into sheets (of paper).

Recommended for You:
Discovery Of Mysterious Hindu Havan Kund In Peru
Dry Cell Battery: A Critical Analysis Of Its Invention In Ancient India 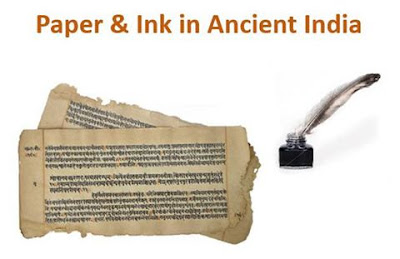 Eighteenth and nineteenth-century Indian manuscripts were written in mainly four colours – gold and silver, used by the wealthy; black was a favourite colour of ink; red was used mainly in border designs and at the beginning and close of the manuscripts.

Ink manufacturing was a specialized task and Brahmins seemed to hold the prerogative. The surname Raktavan denoted a professional ink-maker.

Gold and silver colours were derived from the metals themselves, while the black ink was obtained from kajjala (soot/lampblack). Red ink was sourced from darada (red lead), alaktaka (red sap), and gairika (red chalk).

One method of manufacturing black ink — lampblack, roasted rice, some sugar, and on occasion, kesurte plant juice, was used in the process.

A meticulous process was used to manufacture ink since the lampblack could very easily settle at the bottom. Gloss was a desirable feature and could be had by adding acacia gum. Such ink was used appropriately for writing on paper.

A decoction of atta and kesurte (Verbesina scandens) juice was ideal for palm leaf manuscripts – the ink so prepared was good for such writings as the ink would be absorbed by the leaf, hence remain clear and glossy through centuries!

Another means of writing on palm leaf was by ‘writing’ on the leaf with a sharp iron stylus, and then smearing a mixture of soot and oil over it. A cloth was used to clear away any excess. This ink was produced by burning either coconut halves, almonds or kacalis, and adding oil to the soot so obtained. History of Paper and Ink can be traced back in Ancient India which had very well mastered the art of its manufacturing.