Impact of Western Culture in India: A Critical Analysis

Impact of Western Culture in India over Indian Culture is visible in every sphere of life.

Indian culture which is one of the oldest & richest cultures of the world has amalgamated and mixed with different cultures of the world.  The impact of Western Culture is seriously eroding its centuries old practiced traditions and ethos.
Is it a fact now that western culture is establishing its strong base in India and slowly and gradually wiping the Indian culture?
The visible impact can be not only felt in the metro cities of India but slowly it is heading towards other parts of India more particularly even the rural India which still holds the fortress for such changes.
Westernization has not only affected our traditions, customs, ethos, our family bondage and our respect and love to elders but it is also affecting the basic social norms which were in practice for thousand of years.
Joint family bondage is decreasing and everyone wants to remain aloof from others. No body now bothers about others and only cares about himself which is totally contradictory to our Indian culture which teaches to be a part of each other Joy’s and Sorrows to celebrate the moments together and share the grief together.
Slowly all our values for which India has the pride is vanishing due to Impact of Western Culture in India and western culture is taking over its place. People are blindly following the western culture without knowing its consequences.

Before we start with this topic, we must first know what culture means.

Culture has been defined in a number of ways. It is said to be the learned and shared behavior of a community of interacting human beings.

Culture describes what people develop to enable them to adapt to their world, such as language, gestures, tools to enable them to survive and prosper, customs and traditions that define values and organize social interactions, religious beliefs and rituals, and dress, art, and music to make symbolic and aesthetic expressions.

Culture determines the practices and beliefs that become associated with an ethnic group and provides its distinctive identity.

Every culture is enriched with some good and bad features.

Broadly the world has been classified into the western and the eastern culture. The East-West dichotomy is a sociological concept used to describe perceived differences between Western cultures and the Eastern world.

Cultural rather than geographical in the division, the boundaries of East and West are not fixed but vary according to the criteria adopted by individuals using the term. 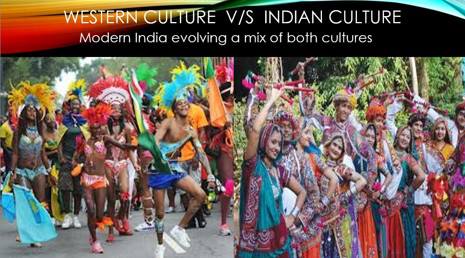 When asked, “what is(or was) that culture like?” one person may respond by telling about the food and the types of sports played, while another may tell about the religion and the types of art works produced.
Below is just one way to break the culture of a place down into six individual aspects.
1. Government & international relations
2. Resources & economics
3. Religion & spiritual beliefs
4. Learning & technology
5. Family life, community & society
6. Arts & crafts

Now in this paper, we will discuss few aspects that vary widely between the western culture and the Indian culture.

Impact of Western Culture in India

The culture of India has been shaped by its long history, unique geography, diverse demographics and the absorption of customs, traditions and ideas from some of its neighbors as well as by preserving its ancient heritages, which were formed during the Indus Valley Civilization and evolved further during the Vedic age, rise and decline of Buddhism, Golden age, Muslim conquests and European colonization.
India’s great diversity of religious practices, languages, customs, and traditions are examples of this unique co-mingling over the past five millennia and Impact of Western Culture in India.
The various religions and traditions of India that were created by these amalgamations have influenced other parts of the world too.
On the other side, Western culture is a body of knowledge derived from reason. This foundation of reason has made possible a vast accumulation of understanding related to reality or nature, including human nature.
This understanding is represented in several core ideals and values, which include individualism, happiness, rights, capitalism, science, and technology. Western culture can also be referred to as advanced culture; this is because its ideas and values promote the development and sustainment of advanced civilization.

We study different religious faiths in order to understand other people.
Many people have strong religious convictions, and it would be impossible to understand them without first understanding their beliefs. Judaism, Christianity, and Islam are monotheistic faiths practiced by about half of the world’s population.
Monotheism refers to the belief in one God. The faiths are often called western religions to distinguish them from the eastern religions practiced primarily in Asia. While western religions are centered on the belief in one God, many believers of eastern religions seek to find enlightenment by looking within themselves.
and at times many Gods.
Hinduism and Buddhism are popular faiths in India. The relationship of India with other religions is integration, whereas the relationship of western towards others is opposition.
This is basically the difference between the two. But the Impact of Western Culture in India is significant enough to leave its marks and the vividity which can be not only seen but may be also felt.
The uniqueness of Indian culture is its composite and pluralistic nature. In no other part of the world has religious and cultural plurality co-existed and cross-fertilized each other so creatively.
While Christians fought their denominational wars in the western hemisphere, Indian Christianity remained free from confessional conflicts and sectarian tensions. Togetherness is the essential character of our way of life. It is this spirit of togetherness that welcomes and blends diverse elements that seem disparate outside of that framework.
This mytho-spiritual character of the Indian ethos has never failed to mystify western observers. India is a spiritual-cultural unity-in-diversity that can host the different and the contrary.
On the other side, the West degraded religion into a theatre of conflict. The great battle between Christianity and Islam and a thousand battles within Christianity were fought either within Europe or on account of Europe.
Christianity, in particular, suffered gross distortions on account of its domestication in the western culture.
The main differences in the beliefs of India and western world are that, in India, the belief says that “The true key is inside. What is valuable – is the inner world of the human being and his natural ability to control and develop it.
The way ahead – is through self-development (inside intervention)”, whereas in the western world it is “The main values are success and happiness that can be achieved in different ways, but rarely through developing one’s inner strength.
The majority of the criteria for success and happiness have outer nature (money, faith, popularity, etc.). The way ahead – is through active outside intervention.” “Happiness lies in virtuous activity, and perfect happiness lies in the best activity, which is contemplative.” – Aristotle

I’d like to dwell on one aspect of Western culture that tends to be downplayed, but is quite important: Westerners are the only culture in the history of mankind to develop realistic, faithful depictions of beings and matter in our paintings and sculptures, rather than merely stylized depictions.
Westerners are also the only culture to invent a way to depict three-dimensional subjects in a two-dimensional format.
A similar perspective was lacking in all other types of early art, be that Chinese or Japanese, Indian, Mesoamerican, African or Middle Eastern. This could conceivably be because the Western man has perceived space and spatial relationships in a different way than other men.
The Impact of Western Culture in India has left its marks and to a certain extent caused the Indian Culture to change or modify.
Westerners are different lots. The story of Indian art is also the story of the oldest and the most resilient culture on earth. It is seen as an amalgamation of indigenous and outside influences, yet has a unique character and distinctiveness of its own.
Indian art is also an art of social, political and religious influences. It changed and evolved with the evolution of a civilization which was full of remarkable innovations in all areas of artistic expression.
Indian art features spirals and curvaceous lines, vines and tendrils, round-figured goddesses, circular amulets, colored gemstones, arches and domes, haloed deities, crescent moons, and the globe of the sun. Indian sculptures and paintings depict the diversity, color, and spontaneity of this country and are representations of the all-encompassing nature of Indian culture.

Either people have live-in relations or they get divorced, if they are not compatible with each other. So, how could a person in their right mind have mental peace in such an environment, where relationships are breaking every other day. Because of the lack of family values and existence of a family life, people end up doing drugs, crimes etc.

Even studies and research also proved that western civilization suffers more from depression and emotional misbalance than their eastern counter parts.

Below are few major differences that we can easily find between the two societies:

In spite of all these difference between the two culture, each one has caused its effects on the other. The Impact of Western Culture in India over the Indian Culture is though more pronounced.
Some of the powerful advantage of Indian culture compared to western just for the sake of understanding may be enumerated  as follows:-
1. Indian scientists- “saints” researcher in nature and developed technology for the betterment of human life. They researched over their discoveries and invention for years and then only distributed it to humans. Scientists of today have become selfish and are running after fame and wealth.
2. Indian culture of respecting elders and learning spirituality and life science gives us a way to live life and not like western people who live like animals- having sex with anyone including sisters, etc. for getting parents and elders, doing anything they like.
3. We have our own form of exercise and medicine that is flawless compared to other science and has no side-effects.
4. Sanskrit is the mother of all languages, which is so complex and huge that many things can be described and learned from it.

Indian culture has given many things to mankind. And it is worth appreciating and thanking it.
1. Manners like respecting parents, teachers, etc, evolved from Indian culture.
2. The aspect of seeing God in all- statues, stones, human, animals.
3. It has been also proved that the Indian ceremonial fire- Yagna, gives many benefits to the surroundings like clean air, peaceful atmosphere, etc.
4. Various sciences like arithmetic, geometry, astrology, and astronomy have been studied by Indian saints.
5. Surprisingly- none of the facts written in Vedas has yet been proved wrong or incorrect.
I agree that the features like caste system, Sati, etc are wrong practices. Westerners have a lot to learn from us and we too have some good things to learn from them. The Impact of Western Culture in India, in fact, has already cast some cultural changes.
There are huge differences between Indian and western culture. Like there is always a head and tail for a coin there is both positive and negative impact of western culture and Indian Culture.
I think both cultures are unique in their own way and equally good. Western culture and Indian culture both have good qualities and bad qualities. We should not think of which culture is better but should take the good qualities of both cultures and put it into use in our life. Impact of Western Culture in India and vice-versa in Western countries is impeccable.
Indian CultureWestern Culture
1
Share FacebookTwitterGoogle+ReddItWhatsAppPinterestEmail