By RS Pandey
0
Share
When you watch Kailasa Temple Ellora and look at the design and amount of work put up in its construction, you will unknowingly yell. Is it possible for the human being to construct something like this on the earth?
But awfully, It is the bi-partition attitude of historians who have neglected this marvelous piece of human creation and did not include it in the list of wonders of the world.
Tajmahal is magnificent, there is no doubt about it,  but the Kailasa Temple Ellora is NO LESS than it in any regard, whatsoever.

The Kailasa Temple Ellora is an ancient Hindu temple located in Maharashtra, India.

It is made by using rock-cut technology. This is one of the 34 temples and monasteries, which are known collectively as the Ellora Caves.

The Kailasa Temple Ellora extend over more than 2 km, were dug side by side in the wall of a high basalt cliff in the area located at Ellora, Maharastra.

The Kailasa (cave 16) is a remarkable example of Dravidian architecture on account of its striking proportion, elaborate workmanship, architectural content, and sculptural ornamentation of rock-cut architecture.

The temple was commissioned and completed between 757-783 CE when Krishna-I ruled the Rashtrakuta dynasty.

It is designed to recall Mount Kailash, the home of Lord Shiva. The beauty and the most astonishing part of this architecture are its megaliths carved out of one single rock. It is said that it took more than 100 years to construct this temple. 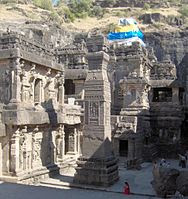 The Kailasa Temple Ellora is notable for its vertical excavation—carvers started at the top of the original rock and excavated downward.

The traditional methods were rigidly followed by the master architect which could not have been achieved by excavating from the front.

It is estimated that about 400,000 tons of rocks were scooped out over hundreds of years to construct this monolithic structure. From the chisel marks on walls of this temple, archaeologists could conclude that three types of chisels were used to carve this temple. 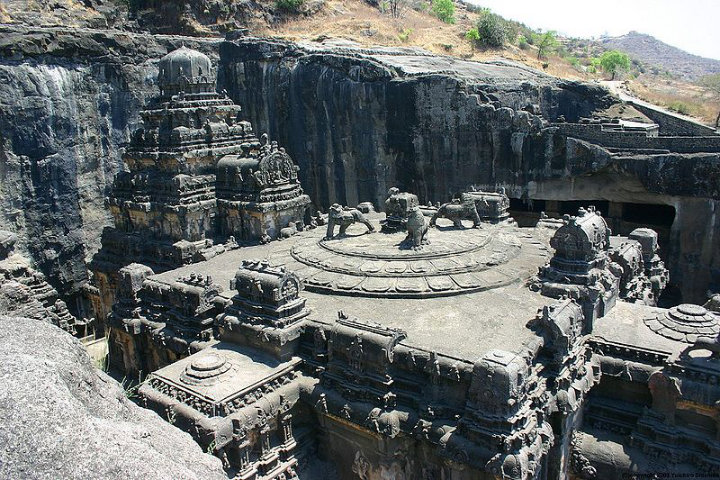 All the carvings are at more than one level. A two-storeyed gateway opens to reveal a U-shaped courtyard. The courtyard is edged by a columned arcade three stories high.

The arcades are punctuated by huge sculpted panels, and alcoves containing enormous sculptures of a variety of deities. Originally flying bridges of stone connected these galleries to central temple structures, but these have fallen.

Within the courtyard are two structures.

As is traditional in Shiva temples, an image of the sacred bull Nandi fronts the central temple housing the lingam.

In Cave 16, the Nandi Mandapa and main Shiva temple are each about 7 meters high and built on two stories.

The lower stories of the Nandi Mandapa are both solid structures, decorated with elaborate illustrative carvings. The base of the Kailasa Temple Ellora has been carved to suggest that elephants are holding the structure aloft. 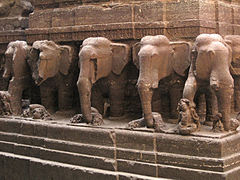 There are two Dhwajasthambha (pillars with Flagstaff) in the courtyard of Kailasa Temple Ellora. The grand sculpture of Ravana attempting to lift Mount Kailasa, with his full might is a landmark in Indian art.

Chronology of Ancient History of Cultural Diversity in India