The Kollur Mookambika Temple is the abode of Maa Mookambika who is the incarnation of mother goddess Shakti representing her all three forms namely Maa Kali, Lakshmi, and Saraswati.

The Kollur Mookambika Temple is situated at Kollur, Udupi District in the state of Karnataka. The temple is said to be more than 1200 years old. Historically there was a king named Halugallu Veera Sangayya who is known to have installed the idol of Maa Mookambika there.

At the Kollur Mookambika Temple, there is Udbhava Linga of Lord Shiva who is said to be self-manifested. This Lingam represents both Purusha (male) and Shakti (female) forms of deity. 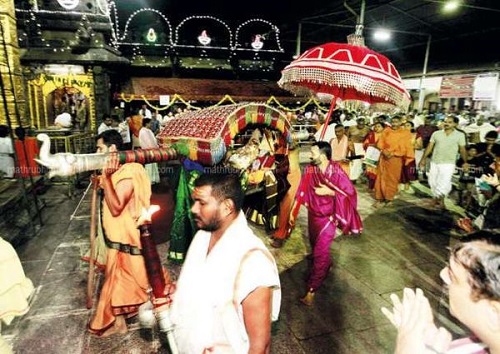 The Kollur Mookambika Temple is one of the most revered shrines for Hindus in India with mystic powers. Devotees throng to the place for the goddess blessings throughout the year.  Navaratri festivities is celebrated every year at the temple and it is a very auspicious occasion to visit the shrine.

As per the mythological history, it is said that at the Kollur Mookambika Temple, once lived a demon by name of Kaumasura. He was an ardent devotee of Lord Shiva and through his prayers had obtained special powers.

Legend-1 behind the Kollur Mookambika Temple

The legend says that the demon Kaumasura, fearing that someday he will die soon, he thought to become immortal. Therefore to achieve this power of immortals, he started worshipping Lord Shiva. He continuously worshipped for many years facing all the hardships of weather and adverse conditions. Pleased with his penance Lord Shiva appeared to fulfill his WISH of immortality.

On hearing this news all gods and goddesses became fearful and apprehensive. They planned that the WISH of the demon Kaumasura must be somehow abnegated. Therefore they prayed mother goddess Shakti for help.

Upon the dictate of mother goddess Shakti, Maa Saraswati who is also known as the goddess of knowledge and the speech moved in and took away the ability to speak from the demon Kaumasura. The Kaumasura then became a mute demon and was subsequently known as Mookasura. He could not ask Lord Shiva to become immortal and therefore remained as a mortal body.

Sensing the future danger, Maa Kali in her apocalyptic form of Maa Durga killed the demon Kaumsura who was also known as Mookasura. Since the goddess killed Mookasura, therefore, she was worshipped and came to be known as Maa Mookambika.

Legend-2 behind the Kollur Mookambika Temple

As per yet another legend, Once the great spiritual Guru Shri Adi Shankaracharya worshipped intensely before Maa Mookambika Devi in the Kodachadri hills.

Pleased with his prayers, the goddess appeared and asked for his WISH. Since the Shankaracharya belonged to Kerala and there was no temple of the goddess in the region, he wished to take her to Kerala and install her in a temple there. 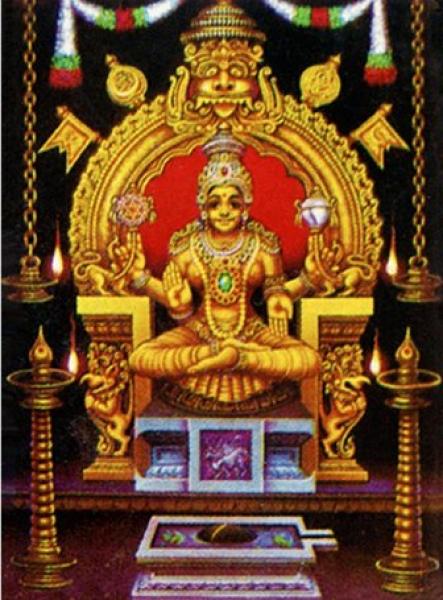 On this, the goddess agreed to fulfill his WISH but presented a condition. She said that she will follow Adi Shankara to the destination of his desire, but once they start the journey “Adi Shankaracharya should not look back till he reaches his destination”. She told that “If he breaks the condition, she will not move any farther from that place and then he has to install her idol where she will be at that moment”.

Adi Shankaracharya agreed to the proposed condition of Maa Mookambika.

Both Adi Shankara and Maa Mookambika Devi in her form of Saraswati began the journey. When they were moving, Adi Shankaracharya could understand the movement of Mata by the distinctive sound of her anklets and therefore he was reassured.

On their journey, both of them reached Kollur. Suddenly Mata decided to test the spiritual guru and she intentionally stopped the sound of her anklets to see that whether Adi Shankara was able to understand her movements.

When there were no sounds of the anklets, Adi Shankara got into doubts and therefore looked back to check whether Mata was following him.

In the process, the condition imposed got broken. On this, the goddess Mookambika Devi stopped moving any further. Adi Shankaracharya as per the condition, constructed the temple at Kollur which was known as Kollur Mookambika Temple.

After installing the idols, Adi Shankara prayed before the idols to forgive him for breaking the condition and move with him to Kerala. On his repeated prayers the goddess agreed to be in Kerala only during the morning hours at the Chottanikkara temple and will return to her Kollur temple in the afternoon.

At Kollur Mookambika Temple, nearby to the temple, flows a river. As per another legend, the eagle Souparna performed penance at the temple before the goddess and attained Moksha. In the remembrance of the eagle Souparna, the river was named after him and is known as Souparnika River.

The importance of the Kollur Mookambika Temple is so profound that if you perform a Yagna-Puja at the temple, it is said that it is equivalent to perform similar Yagna-Puja at thousand temples.

Many renowned Rishi- Maharshis and Devi-Devtas have performed penance at the Kollur Mookambika Temple to obtain the blessing of the deity and thereby ultimate Moksha.

A visitor to the Mookambika Temple includes lord Srikrishna along with Rukmini and Sathyabhama and various sages like Shukracharya, Bruhaspathi etc. who have done penance at the temple.

How to Reach Kollur Mookambika Temple? 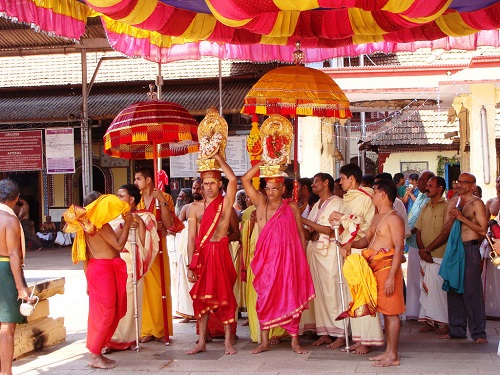 To reach Kollur Mookambika Temple you can opt for air route and reach to the International Airport. Mangalore which is about 136 km from the temple. From their, you can take a taxi service.

What are the Dress Codes of Kollur Mookambika Temple?

Women must wear Saree with blouse. However, wearing Salwar Kurti with Dupatta is permitted. Wearing Lehenga Choli and fashionable decors etc are prohibited.

What are the Kollur Mookambika Temple Timings for Darshanam?

On visiting the temple, one should approach counter number 4 and 5 for the issue of Prasadam coupons on payment. Darshanam timing are as follow:-

What is the complete Kollur Mookambika Temple Address?

Below is the list of few more articles whom you may find of profound interest to fulfill your spiritual journey.