Dissension of Lord Shri Krishna and Beginning of Kali Yuga

There is a lot of misconception about the dates when Kali Yuga started and its relation with  Lord Shri Krishna who is the incarnation of God. He taught us “Work is Worship” and “God helps those who believe in Work and does it”.

In the following paragraph, I will be dwelling on the subject of dissension of Lord Shri Krishna and beginning of Kali Yuga. 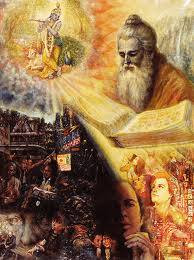 3228 BC – Dissension of Lord Shri Krishna

According to the “Surya Siddhanta” the astrologers have calculated that Kali yug started on the afternoon of 17th February, 3102 BC. In the Bhagwatam, Brahma tells in round figures that Shri Krishna remained on this earth planet for 125 years.
(य्दुव्न्शेयवतिर्णस्य भवतः पुरुषोत्तम | श्र्च्छतनं व्यतीयाय पञ्चविंशाविकं प्रभो || 11 /6 25).

Accordingly, if 125 years is added to February, 3102, it comes to February 3227 BC. But Shri Krishna’s dissension was in the Rohini nakcÝhatra (asterism) of the 8th waning moon midnight of Bhadon (August) which is about seven months earlier. Thus, His descensions date is 3228 BC and He stayed on the earth planet for 125 years and about 7 months.

The Pandavas, after winning the Mahabharat war, ruled for 36 years and 8 months until the start of kali yuga in 3102 BC. Accordingly, the date of Mahabharat war comes to 3139 BC.

Jagadguru Adi Shankara: A Brief Chronology of His Life