The Spicy History of Malabar

The older region of Malabar was famous for Malabar Black Pepper. Malabar region of ancient India relates to parts of present days Southwest India and mainly includes the state of Kerala.

To be more precise, the erstwhile Madras Presidency, which includes substantive areas of Tamilnadu and Kerala was known as Malabar areas. The Malabar area was once renowned for its pepper trade. Black Peppers was grown using indigenous methods and were traded by the ancient Roman and Arab traders.

Evidence shows that later on, migrating communities of European navigators shown a keen interest in this product for its qualities and taste and they heavily traded it into their parts of areas.

There were and even there are two varieties of Malabar pepper. The one which is black or dark black and the other one is dark brown. The former has a globular with wrinkled surface whereas the latter has only the wrinkled surface. The medium sized berry may have sometimes a slightly greenish hue also.

The pungent aroma with the rich fragrance of the Malabar peppercorn attracts in modern days a large population of the world for its use in more particularly non-vegetarian food and signature dishes. Milder yet exotic flavor of the spice makes the food overpowering and noticeable. Pepper is also known to possess several medicinal properties. It is said that

Milder yet exotic flavor of the spice makes the food overpowering and noticeable. This Pepper is also known to possess several medicinal properties. It is said that Malabar Black Pepper controls anger as it causes a soothing effect on nerves. Its efficacy in this regard can be verified by the herbal practitioners.

Recommended for you:
Mystery of Kumari Kandam
Traditional Medicine: The Indian Ancient System

To find out authenticity and quality of Malabar Black Pepper, one can have a look at the following ingredients in the peppercorn.

Usage of Malabar Black Pepper can take various forms in its applicability. It can be used as a whole grain, coarsely grinned or fine grinned in powder form. This can be sprinkled on the prepared food particles or used while in cooking. 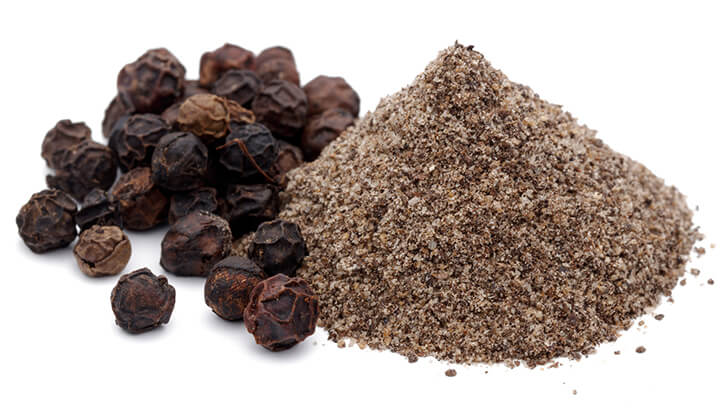 Pepper is a hot, pungent spice with a host of health advantages. It’s used extensively in Ayurvedic medicine. It’s an active component called piperine which gives pepper its characteristic taste.

Pepper generally is added to savory dishes when they’re done the cooking, Otherwise, its volatile oils are likely to evaporate and reduce its flavor.

The piperine in pepper improves the bioavailability of numerous nutrients like vitamins A plus C, selenium, beta-carotene, plus others, thus enhancing your state of health.

Scientists have found that it could increase the bioavailability of the compound curcumin twentyfold. Curcumin helps combat cancer, infection, and irritation.

In addition, Malabar Black Pepper because of its specific characteristics, is known to prevents the removal of materials from cells and reduces intestine activity, so more materials enter the body in active type and stay accessible for use.

In addition to adding flavor to the food and promoting digestion, pepper works as an appetite stimulant.

Research demonstrates black pepper helps improve the hunger through olfactory stimulus. Which makes it a fantastic, simple remedy for all those with an unhealthy appetite.

An Ayurvedic remedy especially for digestive problems, calls to have a combination of one-half teaspoon of pepper and one tbsp of jaggery powder. Take this remedy on a daily basis until you see improvement.

Even though Malabar Black Pepper stimulates the appetite, it may help you shed weight. A study in the year 2010 shows the consequences of piperine on the metabolic process of mice. It is proved that it suppresses fat build-up inside the body.

By improving the metabolic process black pepper may help you to burn the calories. As being carminative, it alleviates gut gas and also helps prevent gas development.

If you’re predisposed towards stomach gas, try to spraying your food with Malabar Black Pepper, rather than chili powder or other peppers. You will instanstantly see the result.

To cure heartburn and heaviness in your stomach, you might have a glass of milk mixed with one-quarter teaspoon each of pepper and cumin powder. It is a magnificient remedy for such problems.

In a modern world, Malabar Black pepper has spread its geographical region of growth and can be found to be cultivated from India to Indonesia and up to the Ecuador to Brazil. But still, the environmental conditions of the Malabar region makes the peppercorn unique and distinct from peppers grown in other parts.

In the modern world, Kerala has been known and is renowned for growing Malabar Black Pepper. Any attempt to mislead the people of its origin and the taste for merely business gain should be thwarted and deplored. Come to India, grab the product and taste it. Believe me, its unique, fresh and exotic.

Hope this article on Malabar Black pepper will help you to take the right decisions in buying and consuming the qualitative product for the betterment of your health.

Do let me know if you have some tips or suggestions about the article or product which can help us to understand the efficacy of black pepper in a better way. Please drop your suggestion in the comment boxes.

If you find that this article has been useful, please share it with your friends on various social media, Facebook and Google Plus funnels.

Why do Hindus Remove Shoes before Entering a Pooja Ghar