Mystery of The Lost Continent of Lemuria, Referred as Kumari Kandam

Pandiyan Kings ruled almost for 10,000 years on the continent of Lemuria before it got submerged under water. The Lemuria continent better referred as ‘Kumari Kandam’ was located between the Indian and Pacific Oceans, connecting Africa with South India through Madagascar.

Though vital scripts on this legendary lost continent are not available today but still some reference in the Tamil and Sanskrit literature can confirm the existence of this marvelous land piece that existence once centuries ago.
Recent ocean exploration work in the Indian Ocean, south of present day Kanyakumari district of South India has further strengthened the belief. 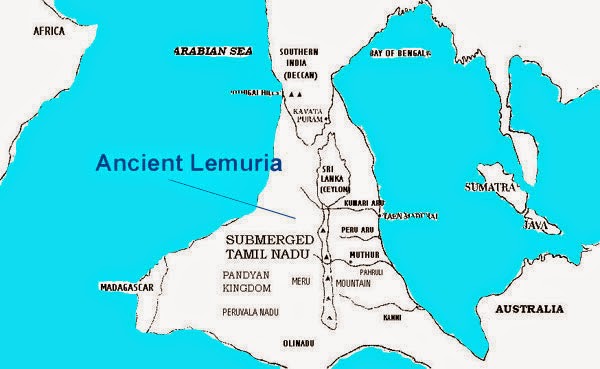 It is an irony and perhaps the most saddened stories of the ancient time.

With submersion of the Kumari Kandam continent, once the highly prosperous commercial city, the capital of Chola Kingdom, Poompuhar and six of the colossal temples of Mahabalipuram out of the seven totally submerged under water.

One of the eminent professors of the University of Jaffna, Dr. A.Shanmugathas, head of the department of Tamil, confirms the loss of Kumari kandam in his findings.

It is said that a big Tsunami like catastrophe occurred during those times which broke and submerged the continent.

The Sangam Literature, which is said to be more than 2,000 yrs old refer to similar natural catastrophes which occur time to time in those areas and which affected and destroyed the Tamil speaking world of those times.

Other deliberations and talks on the Lemuria continent can be found in the literary works of people of eminence around the world.

Professor Karsten M. Storetvedt, the chair in geomagnetism at the University of Bergen, Norway, and an author of the Global Wrench Theory (GWT), says that the equator regions have always been most prone to natural catastrophes like earthquakes and volcano eruptions.

A part of the explanation is that planet rotation and especially the difference in rotation speed between poles and equator force earth mantel to strain and to break more easily where the strain is strongest, that is at the equator regions.

These tectonic processes played important role in the disappearance of the ancient continent known as Lemuria (Kumari Kandam) to western scholars. Sri Lanka together with India, Indonesia and Malaysia were a part of this continent.

Many islands in the Pacific and Indian oceans are remnants of this continent that in ancient time covered the whole area of today’s ocean.

Storetvedt, who seems to reject the theory of continental drift and plate tectonics, says that descriptions of cataclysms in early literature when land suddenly went underwater are logical. But they should be proven to be scientific facts. This can be done with the help of sea-floor analysis that is possible to carry out.

Recommended for You:
Kailasa Temple In Ellora Caves
The Spicy History Of Malabar Black Pepper: An Insight History

How much truth is there in the story of Kumari Kandam?

According to researchers at India’s National Institute of Oceanography, the sea level was lower by 100 m about 14,500 years ago and by 60 m about 10,000 years ago. Hence, it is entirely possible that there was once a land bridge connecting the island of Sri Lanka to mainland India.

As the rate of global warming increased between 12,000 and 10,000 years ago, the rising sea levels resulted in periodic flooding. This would have submerged prehistoric settlements that were located around the low-lying coastal areas of India and Sri Lanka.

Stories of these catastrophic events may have been transmitted orally from one generation to another and finally written down as the story of Kumari Kandam. 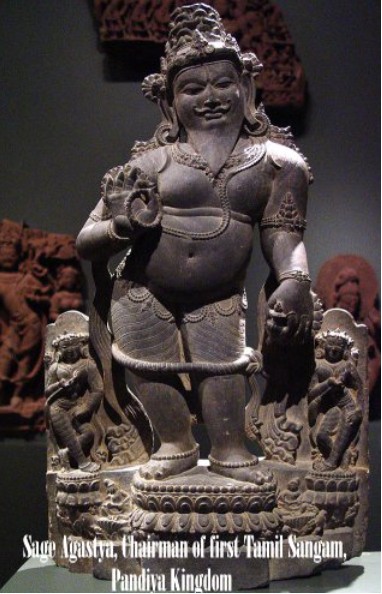 We can find mention of “Kumari Kandam” from various other sources also.

As per the Tamil literature, the Pandyans, the ancient Tamil kings, formed three Tamil Sangams to promote Tamil language and literature. The first two Sangams can be traced in antediluvian Tamil land which bore the name of Kumari Kandam. In Tamil, ‘Kumari’ means ‘pure/virgin’. Therefore Kumari Kandam meant the ‘Land of the Virgin’ or ‘Virgin Continent’.

According to Silappadhikaram, one of the five great epics of Tamil Literature written in second centuries CE states that the cruel sea took the Pendiyan’s land, part of which was present between the rivers Pahruli and the mountainous banks of the Kumari. These rivers are said to have flowed in a now-submerged land.

Adiyarkkunallar, a 12th century CE commentator on the epic, explains this reference by saying that there was once a land to the south of the present day Kanyakumari, which stretched for 700 kavatam from the Pahruli river in the north to the Kumari river in the south.

It is a saddened fact that the lost continent of Lemuria or Kumari Kandam sunk into the Indian Ocean 1000s of years ago, and with it vanished the most prosperous and a humongous Tamil civilization.

Sanskritization: The Process of Change in Indian Society