Someone righteously said that to know the history and culture of a society, you should visit their temples.

It is basically because of the fact that people construct their temples based on their heritage, culture, and ethos that they practice during their

In South Indian Temples, one can witness two prominent styles of architecture which is known as Dravidian Style and Vijayanagara Style.

These grandeur styles basically signify tall pyramids like towers. They are constructed by using sandstone, granite, and soapstone which gives them a beautiful look of spirituality.

5 most Revered South Indian Temples that we are going to discuss here are given below:-

It is one of the oldest and most famous South Indian Temples which was built in 300 AD. It is also prominently known as Tirupati Balaji Temple which is dedicated to the deity Lord Vishnu. 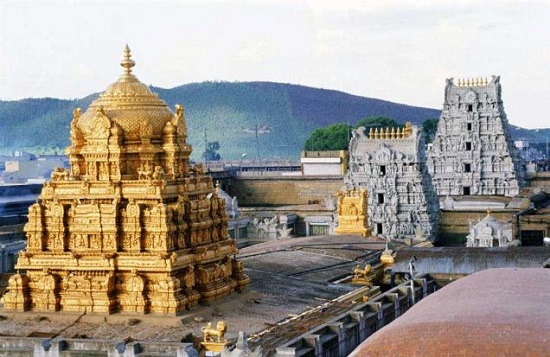 This temple is situated in the beautiful serene mountainous Tirumala region in Chittoor district of Andhra Pradesh, India.

It is believed that Lord Vishnu appeared to save the mankind from the sufferings and agonies of Kaliyuga. Because of this belief, Lord Venkateswara is also referred as Kaliyuga Prathyaksha Dalvam.

This famous spiritual temple among all the South Indian Temples has been constructed using a Dravidian style of architecture.

The temple houses Lord Venkateswara in his standing posture in the Garbagriha called Ananda Nilayam.

This temple is visited by 40 million people on average in a year and to control the rush there are two Queue complex buildings.

The temple also houses Hair tonsure building where devotees shade their hair to the god and there is a Prasadam building known as Tarigonda Vengamamba Annaprasadam Complex which provides free meals to devotees.

When you enter the temple premises, you will witness Kevala Narasimha, Hanuman, and Lakshmi Narasimha at the main gate.

It is one of the richest temples not only among all the South Indian Temples but from temples of the whole of India. People donate gold, silver, and cash in huge numbers.

There is a famous story behind the temple. It is said that Lord Vishnu failed to pay the debts of Kubera, therefore, could not return to Vaikunta. As per the popular belief, people help Lord Vishnu to pay his debt by donating the valuables that bring to them prosperity and good fortune in return.

The Tirupati Temple of Lord Venkateswara is foremost among the prominent South Indian Temples.

Operation and management of the temple are carried by a trust board named as Tirumala Tirupati Devasthanams. In addition to the members of the board, they are also helped by a representative of the government of Andhra Pradesh.

The temple is well accessible by air and roads from any part of India. It is situated at a distance of 290 km from Bangalore and 140 km from Chennai.

Recommended for You:
Kailasa Temple Ellora Caves as Wonder of all the Wonders of World
Kollur Mookambika Temple: A Refreshing Visit for Spiritual Enlightenment
Sri Kalahasti Temple: The Famous Temple of Rahu Ketu Pooja

Meenakshi Temple is one of the very famous amongst all the South Indian Temples. It is also popularly known as Meenakshi Amman or Minakshi-Sundareshwara Temple. This temple is situated at the bank of Vaigai River and situated in the district of Madurai, Tamilnadu, India.

The spiritual meaning of Meenakshi is mother deity Parvati and Sundareshwara is Lord Shiva. However, in literal English Meenakshi means ‘rule of the fish’.

This temple is one of the oldest temple among the South Indian Temples and also the whole of India which finds its mention in Tamil Sangam Literatures as the goddess temple of the 6th century.

This temple was completely destroyed in the 14th century by the Delhi Sultanate rulers and all its valuables were looted. However, in subsequent years, the temple was rebuilt and renovated by various rulers at different times.

There is a famous history about the appearance of deity Meenakshi. It is said that once the king Malayadwaja Pandya performed a yagna and offered his prayer to Lord Shiva, requesting him to grant him a son because he was childless.

As a result, during the puja ceremony, a three-year-old girl appeared from the holy fire. She looked abnormal in appearance and was triple breasted. Perturbed by her appearance and his desire for the son, the king again prayed Lord Shiva to fulfill his wishes.

However, a divine voice ordered him to accept the girl as his child and assured him that her third breast will disappear as soon as she will meet her future husband. The king and his wife accepted the girl as her child and named her Meenakshi and made her as their successor.

The city of Madurai is well connected by roads and air from rest of India. It is approximately at a distance of 460 km from Chennai.

Situated in Thiruvananthapuram, Kerala, India, Sree Padmanabhaswami, the divine form of Lord Sree Maha Vishnu, the temple is said to be one of the richest temples in India. 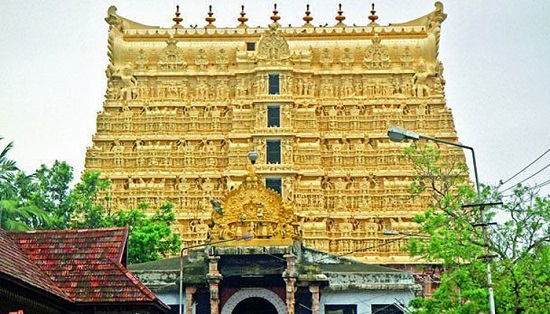 It is perhaps one of the oldest south Indian temples in India whose mention could be found in Brahma Purana, Skanda Purana, Padma Purana, Matsya Purana, Varaha Purana, Vayu Purana, Bhagavata Purana and the Mahabharata.

The precise date of the construction of the temple is not known but in the Sangam period of literature 500 B.C, one can find mention of Sree Padmanabhaswami Temple.

One of the famous historian Dr. L.A.Ravi Varma, who has studied in great details several south Indian temples, says that this temple was constructed on the first day of Kali Yuga which is over 5000 years old after researching on the subject.

In Srimad Bhagavatam, at one place it is mentioned that Lord Balarama visited the temple, bathed in Padmatheertham and made several offerings.

The architecture of the temple presents a great fusion of indigenous Kerala style and Tamil style.

The temple design and architecture match to a great extent from another temple in Kerala known as Adikesava Perumal temple which is located in Thruvattar, Kanyakumari district.

Lord Padmanabhaswamy, is enshrined in the “Anantha-Sayanam” posture which is the eternal sleep of Yoga-Nidra on the serpent Anantha. The Maharajah of Travancore is known as “Sree Padmanabhadasa’ (Servant of Lord Padmanabha). To visit the temple, one must follow strictly the dress code.

In recent times, the temple has been in news for its enormous wealth and the secret chamber which is preserved bound by ‘Naga Bandham’.

It is said that no one can open the secret chamber unless he is well versed in extricating the ‘Naga Bandham’ or ‘Naga Pasam’ by performing specific prayers and chanting ‘garuda mantra’.

One of the famous south Indian temples, the Thanumalayam Temple was constructed in the 17th century and is very famous for its magnificent sculptures. 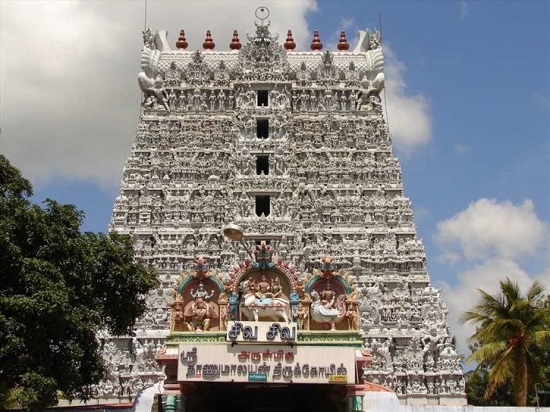 The Thanumalayam Temple is also known as the Sthanumalayan temple where ‘Stanu’ means Siva; ‘Mal’ means Vishnu, and the ‘Ayan’ means Brahma. This temple is equally revered by both the Shaivaite and Vaishnavite sects of Hinduism.

In the temple premises, there is a famous statue of Lord Hanuman known as Anjaneya which is 22 feet high and carved out of a single granite block. It is said that fearing the onslaught of Tipu Sultan, this statue was buried in the temple premises and subsequently forgotten. It was only in 1930 that the statue was rediscovered and subsequently restored.

As per the religious significance of the temple, the representation of the three chief gods of Hinduism in one Linga makes it unique. The Linga represents all the three forms of Hindu gods Shiva (Sthanu), Vishnu (maal) and Brahma (Ayan).

The temple complex houses about 30 different shrine of deities which includes, the main Lingam at the sanctum, the idol of Vishnu in the adjacent shrine. The large idol of Hanuman is situated at the Eastern side of the North corridor.

The temple is situated at a distance of 7km from the main town of district Kanyakumari. Therefore to visit the temple one must first reach to Kanyakumari. It is accessible by roads and air from all parts of India.

The Vittala Temple of Hampi is famous for its architectural grandeur and houses statues of Lord Vishnu. You could be mesmerized by watching the impressive pillared halls, the stone chariot and overwhelming array of sculptures on the giant granite pillars. 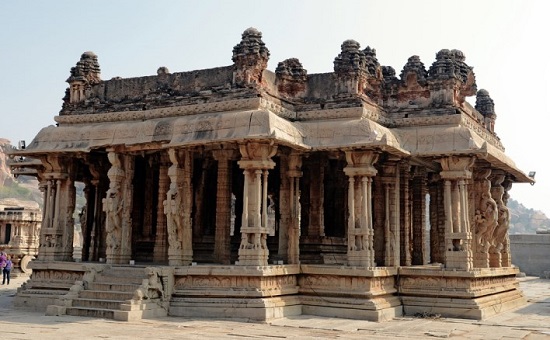 This is one of the oldest among the South Indian Temples in India. It was built around 15th century by the rulers of the Vijayanagara empire.

The temple is located on the banks of the river Tungabhadra in the northeastern part of Hampi. It was built in the Dravidian style of architecture.

The temple houses several shrines which include the Devi shrine and Maha Mantapa hall. The Ranga Mantapa has got 56 musical pillars. Other shrines like Utsava Mantapa, Kalyan Mantapa, and the Stone Chariot are famous for their sculpture.

So the above discussed are the five most revered and famous South Indian Temples. Being a Hindu, one should always try to visit these temples and obtain the blessings of deities. It brings peace of mind, prosperity and ill effects in life are said to be removed.