Sanatana Dharma and Other Religions of India: An Insight Story

A Bird’s Eye View of  Sanatana Dharma, Which Represents the Most Ancient Religion of the World

Let us talk today about the world’s most ancient religion. Let us talk about Sanatana Dharma.

Sanatana Dharma is the original name of what is now popularly called Hinduism or Hindu Dharma. The term Hindu and Hinduism is said to be a recent development, whereas the more accurate term is Sanatana Dharma. It is basically a code of ethics, a way of living through which one may achieve moksha (enlightenment, liberation). It is the world’s most ancient culture and the socio, spiritual, and religious tradition of almost one billion of the earth’s inhabitants who practiced it then. Calling Sanatana Dharma, just a religion will be a gross blunder because it represents much more than that; rather, it provides its followers with an entire worldview, way of life and with a coherent and rational view of the reality of their very existence. It is definitely thus, a far more than merely a religious subject. 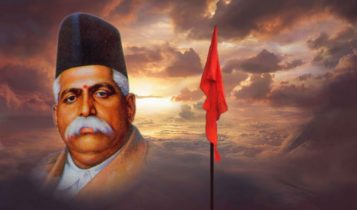 Sanatana Dharma is by its very essence a term that is devoid of sectarian leanings or ideological divisions. This is evident by the very term itself. The two words, “Sanatana Dharma”, come from the ancient Sanskrit language. “Sanatana” is a Sanskrit word that denotes that, which is Anadi (beginningless), Anantha (endless) and does not cease to be, that which is eternal and everlasting. With its rich connotations, Dharma is not translateable to any other language. Dharma is from dhri, meaning to hold together, to sustain. Its approximate meaning is “Natural Law,” or those principles of reality which are inherent in the very nature and design of the universe. Thus the term Sanatana Dharma can be roughly translated to mean “the natural, ancient and eternal way.”

What is Sanatana Dharma?

First and foremost, Sanatana Dharma is anadi (without beginning) and also a-paurusheya (without a human founder). It is defined by the quest for cosmic truth, just as the quest for physical truth defines science. Its earliest record is the Rigveda, which is the record of ancient sages who by whatever means tried to learn the truth about the universe, in relations to Man’s place in relation to the cosmos. They saw nature — including all living and non-living things — as part of the same cosmic equation, and as pervaded by a higher consciousness. This search has no historical beginning; nor does it have a historical founder. This is not to say that the Rigveda always existed as a literary work. It means that we cannot point to a particular time or person in history and say: “Before this man spoke, what is in the Rigveda did not exist.”

a) God-centered rather than prophet-centered.
b) Experience based rather than belief based.
c) Beyond any historical date of founding.
d) The process of growth, which comes from the seed.
e) Inherent in, and inclusive of all.
f) In the world, while above the world.
g) Both immanent and transcendent.
h) The whole and the parts.
i) Loving of all and excluding of none. 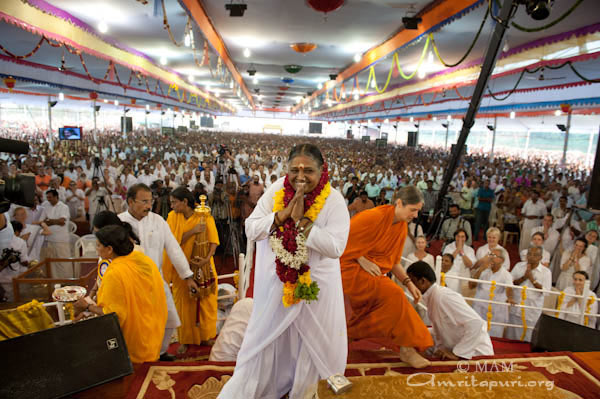 1. Sanatana Dharma recognizes that the greater portion of human religious aspiration has always been unknown, undefined, and outside of any institutionalized belief.

2. The universal flow of Dharma, regardless of what name you call it, whether Dharma or some other name, has eternally existed. It has been before any of the great teachers were born. It is not better than, or alternative to, but is inclusive of all. Dharma is that out of which our earth and humanity itself emerged. Dharma not only is, but always was, and always will be. To live in alignment with, and to know the true nature of that Sanatana Dharma is one of the ways of describing the higher goal of life.

3. Sanatana Dharma thereby gives reverence to individual spiritual experience over any formal religious doctrine. Wherever the Universal Truth is manifest, there is Sanatana Dharma — whether it is in a field of religion, art or science, or in the life of a person or community. Wherever the Universal Truth is not recognized or is scaled down and limited to a particular group, book or person, even if done so in the name of God, there Sanatana Dharma ceases to function.
4. Sanatana Dharma comprises of spiritual laws which govern the human existence. Sanatana Dharma is to human life what natural laws are to the physical phenomena. Just as the phenomena of gravitation existed before it was discovered, the spiritual laws of life are eternal laws which existed before they were discovered by the ancient rishis (sages) for the present age during the Vedic period. Sanatana Dharma declares that something cannot come out of anything and, therefore, the universe itself is the manifestation of the Divine Being. 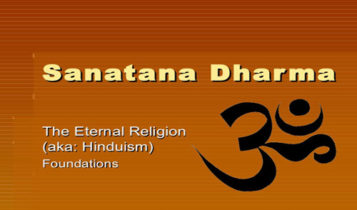 5. Since Sanatana Dharma is referring to those ways of being which are in concert with the Absolute, and are therefore axiomatic laws, this term is not referring to something which is open to alteration. Just as the laws of gravity, mathematics or logic are not open to sectarian debate or relative opinion (gravity, for example, is an inherent law of nature regardless of whether one believes in the law of gravity or not), similarly the subtle laws of God
transcend all partisan concerns.
6. The world is made up of three tendencies called gunas: sattvic, rajasic, and tamasic. Sattvic tendencies are those that are pure, clean, good, wholesome, calming, and peaceful. Rajasic tendencies are those that are active, moving, indecisive, and forceful. Tamasic tendencies are those that are inert, lazy, dull, and dark. If it were not for these three tendencies, we would not exist. Everything is a mixture of them. Even a saint, who is primarily sattvic, has some level of rajas and tamas in him/her, however small.

7. Sanatan Dharma makes use of yoga as the means to attain moksha (God-realization). Yoga has been poorly translated to mean “union”. It does mean “union”, but that is a poor definition because it encompasses so much more. Yoga is the union with Brahman (Absolute God). Yoga is also the means to achieving union with Brahman. Therefore, the word yoga is not merely a statement of the union, but it encompasses the actual experience of liberation.

Sanatana Dharma is the ancient form of Hinduism, which denotes the “eternal” or absolute set of duties or religiously ordained practices incumbent upon all Hindus, regardless of class, caste, or sect. Different Hindu religious books, the Vedas, the Upanishads, the Puranas prescribe different lists of the duties, but in general Sanatana dharma consists of virtues such as honesty, refraining from injuring living beings, purity, goodwill, mercy, patience, forbearance, self-restraint, generosity, and asceticism. Sanatana dharma is contrasted with Sva-dharma, one’s “own duty” or the particular duties enjoined upon an individual according to his or her class or caste and stage of life.

To know more about the Sanatana Dharma and to understand Difference between Christianity & Hinduism perspicuously watch the video The Insight of Sanatana Dharma.