The Longewala border in Rajasthan at its district Jaisalmer and village Tanot accommodates the legendary Tanot Mata ka Mandir where the divine goddess Tanot Mata resides.

As per the Hindu scripture, the oldest Charan literature, Tanot Mata is said to be the incarnation of goddess Hinglaj Mata.

The famous Hinglaj Mata Temple is located in the Hinglaj mountainous terrain of Baluchistan in Pakistan.

In some parts of Rajasthan, Tanot Mata is worshipped also as Karni Mata by the Karni Rajputs who are the ancient warrior class of society said to be protecting and ruling the region since the olden age.

It has now been transformed into a tourist spot in the desert where lacs and lacs of people visit the Tanot Mata Ka Mandir every year to have the blessing of Tanot Mata.

Why Is Tanot Mata Ka Mandir So Famous? 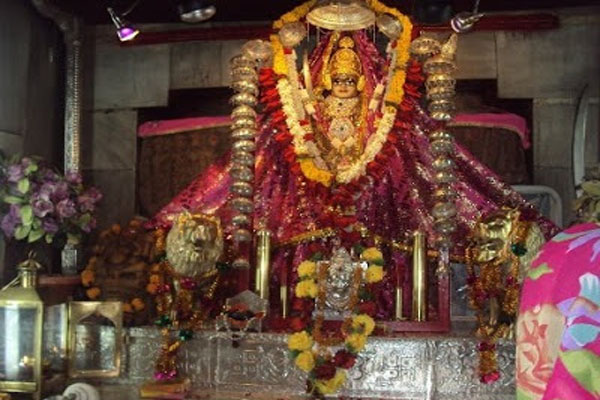 Religion and Faith are two instinctive aspects of human behavior which is beyond any logical explanation. This is also due to the facts that words just can not venture to describe these things accurately.

This human behavioral aspect is perhaps true in relation to the divine and legendary goddess Tannot Mata from the Tanot Mata Ka Mandir in Rajasthan.

The legend explains that not only once but in the two successive wars i.e. in the Indo-Pak wars of 1965 and 1971, at both these events Pakistan shelled more than 3000 bombs in the area of immediate vicinity of Tanot Mata ka Mandir, to destroy the Indian defence structure both men and materials but none of these bombs actually exploded.

Was it just a coincidence or it was the bliss of Mata Tanot who protected the Indian soldiers?

If you visit Tanot Mata Ka Mandir, You may get a chance to witness these unexploded bombs. The BSF has accumulated some of these live bombs and kept it in a museum for the sight and awareness of the general public at large.

It was due to these reasons that Tanot Mata Ka Mandir is so famous.

Recommended for you:
Ganga Ji Ki Aarti At Dashashwamedh Ghat In Varanasi
Kailasa Temple Ellora Caves As Wonder Of All The Wonders Of World

The Miraculous History of Tanot Mata During 1965 War

The Indo-Pak war took place between April and September of the year1965 between India and Pakistan.

This war broke out when Pakistan attempted to infiltrate into Jammu and Kashmir during its Operation Gibraltar.  The Indian side responded in retaliation causing a full-blown war attacking the military establishment in the West Pakistan.

Since the attack was precipitated by Pakistan and they were prepared for the war, they gained an initial edge in the region. On western fronts, Pakistan had captured a large area including the famous city Kishangarh initially during the war.

Armed forces of India stationed at the Sadewala village near Kishangarh fought the most vigorous battle with their Pakistani counterparts in 1965.

Since the Pakistani forces had captured a vast area in the region, they cut off supply lines to the Indian forces and shelled them heavily with bombs.

The area near the present Tanot Mata ka Mandir, at Sadewala, was heavily bombarded by Pakistani forces on 17 November 1965.

Having an edge, it was well accepted that Pakistani forces will crush the Indian counterpart and destroy them with their bombs.

But what a surprise? Pakistani military kept on the bombing, but none of the bombs were exploding in the area.

This provided much-needed solace and support to the Indian forces and they fought the battle with tooth and nail ultimately defeating the Pakistani forces.

The story much prevalent in the area and amongst the Border Security Forces connote that during the war, Tanot Mata herself came in the dreams of many of the fighting soldiers and said that if they remain in the close vicinity of the Tanot Mata Ka Mandir then nothing will happen to them and they all will be Safe and Sound.

It is said that the Pakistani army dropped closed to about 3000 bombs, but none of them exploded, miraculously saving the Indian army.

It is said that it was because of the blessing of the Mata Tanot that none of the bombs exploded and she saved Indian Army.

After the end of the Indo-Pak war in 1965, personnel of the Border Security Force renovated and constructed the Tanot Mata ka Mandir in a much wider area and more profoundly.

Till date, daily Puja offerings and management of the temple is carried out by the BSF personnel.

The area adjoining the Tanot Mata Ka Mandir has been transformed into a tourist destination as the number of devotees visiting the area has substantially increased.

The Miraculous History of Tanot Mata During 1971 War

The miracles of Tanot Mata was repeated in the Indo-Pak war of 1971 also.

The Indo-Pak war of 1971 culminated with the liberation of East Pakistan presently known as Bangladesh.

This war had begun on 3rd December 1971 and lasted up to 16th December 1971 with the fall of Dhaka, now the capital of Bangladesh.

Ruthless defeat on the Eastern borders and fear of losing control over the East Pakistan, Pakistani generals launched surprise attacks on the Western borders of India to revenge the loss.

The famous Longewala battle is always remembered in the context of Indo-Pak war of 1971, where few hundreds of Indian soldiers fought and defeated the Pakistani forces who surprised them in thousand numbers with heavy enforcement of artillery and tank bombings.

The area of Longewala is in the immediate vicinity of Tanot Mata Ka Mandir. This was the second instance in a very short duration that the Pakistani forces had chosen the area to fight a war with India and Indians ultimately defeated them.

The Indian post at Longewala was guarded by a company of just 120 soldiers commanded by Major Kuldeep Singh Chandpuri.

A surprise attack by the Pakistani forces with a full battalion of artillery and the tank company, the Indian side with meager numbers of men and material felt highly venerable. Ther was no way to match the strength of Pakistan on that ruthless night. However, the faith of the soldiers in Tanot Mata kept their morale up to fight the enemy.

Pakistani forces chose to destroy the area with heavy bombing of their fire powers of tanks and artillery. They shelled the area with innumerable bombs. However again the miracle happened and none of the bombs exploded in the area of the immediate vicinity of Tanot Mata Ka Mandir. It was because of this miracle that a handful of soldiers defeated a mighty large contingent of Pakistan in the famous battle of Longewala in the Indo-Pak 1971 war.

Divine and serene bliss of Tanot Mata had again protected the Indian Army.