The War Within Life: How to fight it Out and Merge with the Super Soul?

The Essence of Bhagawat Gita: Fight The War Within

The Life entails us to fight the war within our selves. It provides us an opportunity to enrich our ‘Karma’ or deeds to prepare us to merge with the super soul.

Looking at the agony of life and sufferings, when one turn towards Bhagwat Gita, Life becomes much easier to understand and live with. Life is incarnation and rebirth. It is one of the stops on a long journey. 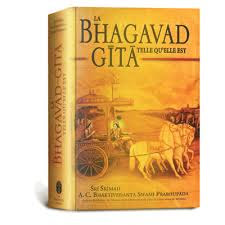 Why Bhagwat Gita? What does Bhagwat Gita mean? Well, as some one has rightly described it as the “Song of the Lord”. Like any perpetual song. it always has some hidden meaning. It depends on the person who, how he describes it or what does he understand from it? The beauty of Bhagwat Gita is, no matter, how many times you read it, every other time, you find some new meaning or understanding coming out from it.

From the above, what does ‘Lord’ mean? Who is the Lord here? Well as the verses flow, we understand that it is Krishna, who has been extensively talked and who is one of the many incarnations of Lord Vishnu. Lord Vishnu is the god of Maintenance. He looks after the every creation of Lord Brahma.

‘Bhagwat Gita’ is the ‘Song of the Lord’

To fight the War of within Life, one has to find out the right ‘Karma’ or the Doings, the Job, Work, or the Process to ascend to.

Let us go the battlefield of Kurukshetra, or the “field of dharma,” where our Lord Krishna serves as the chariot driver of Prince Arjuna.

This war is being fought for succession. This war is fought to establish the righteousness. To establish ‘Dharma’. This is a fight against misrule, injustice and ‘Adharma’ meaning which is not Right. Remember this is not a war between strangers for a cause but a war between the family members and friends. Everyone knows the outcome, that at the end everything or if said most of the things will be destroyed. This teaching is the essence of life as it teaches to look and fight the war within.

“And Arjuna, standing between the two armies, saw fathers and grandfathers, teachers, uncles, and brothers, sons and grandsons, in-laws, and friends. Seeing his kinsmen established in opposition, Arjuna was overcome by sorrow.” –Bhagavad Gita, Chapter 1, verses 26-28.

Arjuna has just asked his chariot driver, Lord Krishna, to position himself between the two armies. He wanted to see the reality of this war and is completely devastated by its implications. Arjuna goes on to describe his anguish, saying that he’d rather allow the enemy to kill him than strike a single blow.

Here is the difficulty: Prince Arjuna is not only part of the royal family, but a member of the warrior class. As Lord Krishna soon explains, Arjuna must fight.

“Considering your dharma (purpose/essence), you should not vacillate. For a warrior, nothing is higher than a war against evil. The warrior confronted with such a war should be pleased, Arjuna, for it comes as an open gate to heaven. But if you do not participate in this battle against evil, you will incur sin, violating your dharma and your honor.” –Lord Krishna from the Gita, Chapter 2, verses 31-33.

Krishna tells Arjuna all of this after explaining the eternal nature of the Atman, the ultimate and immortal Self. He explains that we must detach ourselves from the fleeting nature of sensory objects and temporary feelings because they come and go. Even the body comes and goes, but the soul cannot be “burned or pierced.”

Now, standing between the two armies, Prince Arjuna is literally, spiritually, emotionally, and morally between a rock and a hard place.

This is where many believe the allegory and metaphor of the Bhagavad Gita come into play. Lord Krishna presents himself as a non-combatant. Although he is on Arjuna’s side (and has not yet revealed himself as God), he cannot fight on Arjuna’s behalf. Arjuna, like all of us, must face this life and its challenges on our own.

That isn’t to say that the divine is not with us. Lord Krishna shows us here that God is always there to support and guide us even through the most perilous episodes of our lives, but we cannot expect him to do for us what we ourselves are meant for. Arjuna then represents all of us as we struggle with who we are, what we are meant for–our purpose. Lord Krishna represents the voice of insight, inspiration, divine guidance, our highest self or conscience.

There, in the midst of battle, Arjuna takes the time to fall at Krishna’s feet (which would seem odd considering Arjuna is of higher earthly status) and begs for Krishna’s guidance. Arjuna’s actions show us that wisdom and guidance are not always in the form we expect of them and that no matter what is happening around you, it is never folly to bring yourself to supplication and prayer/meditation/contemplation.

Prince Arjuna is on the battle field. He must make a decision. He must act against the Wrong. He must face his destiny. This is why the battlefield in the story is called “the field of dharma.” The Bhagavad Gita is not a story which condones war. It is a story that illustrates the importance of doing the right thing, of conquering our own darkness, regardless of the cost or struggle. As in the case of Arjuna, we must first face and master ourselves before we can face the problems and evils of the world around us. God will be with us, but the divine cannot fight all of our battles for us. Essentially he is not meant to be so.

So in the light of Bhagwat Gita, there is a question that How are you struggling with your dharma (purpose/essence)? Perhaps you’ve recently been involved in a situation where you were afraid to do the right thing because of one or other reasons. Perhaps you’re wrestling with a choice regarding what you want to do over what you should do. This is Where the battle of Dharma is to guide us. How can Arjuna and Krishna’s opening to the Bhagavad Gita help you face and overcome the War Within yourself? The war imposed by FEAR, WORRY, PRESSURE, OBLIGATION so on and so forth. At last, we have to fight it out for the righteousness and against the evils. We have to fight the  war within life to get rid of evils.

Pakistan Terrorism: As a State Sponsor Of Terror in Region