To remember Swami Vivekananda (born on January 12, 1863) on yet another of his birth anniversaries in such tormented times as ours is to make one’s conscience a little uncomfortable. The man crossed the frontiers of India and went to the Occident to speak of Indian religion and its catholicity with conviction and pride. How would he feel and what would he say if he were in our midst today and witness the pettiness all around us? Do Swami Vivekananda Thoughts have any bearing on our minds today? 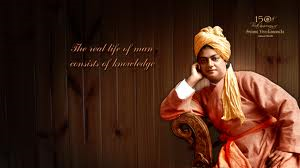 In Colombo on his return from the West, in January 1897, Swami Vivekananda Thoughts found a voice and he said, “You must see that every worship is given unto Him whatever may be the name of the form; that all knees bending towards Caaba, or kneeling in a Christian church, or in a Buddhist temple are kneeling to Him whether they know it or not whether they are conscious of it or not, that in whatever name or form they are offered, all these flowers are laid at His feet.….Thus we have to teach religion. There are other higher lessons that India can teach, but they are only for the learned. The lessons of mildness, gentleness, forbearance, toleration, sympathy, and brotherhood everyone may learn, whether man, woman or child, learned or unlearned, without respect of race, caste or creed. (Says the Upanishad) They call them by various names; Thou is One.”

One is engulfed, for a moment, in gloom and despair as one finds Swami Vivekananda Thoughts, seemingly sinking in the din of violence, fanaticism, and bigotry, all unfortunately in the name of religion; and, in that moment, its retrieval appears a remote possibility.

But then one remembers the faith of Swamiji in the indomitable spirit of India, his robust optimism about her destiny and his iron determination which stood by him even in the most trying circumstances. The opposition he met with and the difficulties he encountered as he undertook to go to Chicago in 1893 and represent Hinduism in the Parliament of Religions failed to daunt him.

As his brother, Dr.B.N.Datta, in his book “Swami Vivekananda, patriot prophet” recalls, “no Hindu religious preacher has been so much under cross-fire of slander and depreciation as Swami Vivekananda. While the conservatives were vituperating at home, there was a strange medley of different sects abroad to malign him and censure him for his supposed failings….(In Chicago) the interested groups overtly or covertly were up in arms against him. The Christian missionary body as a part of Occidental imperialism did not like to see the resurrection of the heathens of India….As a result….Swamiji had to suffer terribly….A dark-skinned man as yet has got a very poor or no chance to lodge himself in a hotel or to eat in a decent restaurant run by the so-called “Whitemen’. In Swamiji’s days, the condition was still worse….Swami Vivekananda had to sleep on the street!”

Adds Romain Rolland, “He (Swamiji) was rudely dismissed from some of the houses. At others, he was insulted by servants. At still others, the door was slammed in his face. After having wandered for a long time, he sat down exhausted in the street.”

But, says the Bible, “one cannot hide a candle under a bushel of hay”. So was the Swami Vivekananda Thoughts. Vivekananda rose above the impediments and obstacles and his intrinsic luminosity shone through the darkness that seemed to have momentarily taken over. On Monday, September 11, 1993, opened the first session of the Parliament. In the midst of a galaxy of Oriental delegates representing various religious orders sat Vivekananda, “the young man who”, according to Romain Rolland, “represented nothing – and everything – the man belonging to no sect, but rather India as a whole, who drew the glance of the assembled thousands. His speech was like a tongue of flame. Hardly had he pronounced the very simple opening words “Sisters and brothers of America!” that hundreds arose in their seats and applauded….Each of the other orators had spoken of his God, of the God of his sect. He – he alone – spoke of all their Gods and embraced them all in the Universal Being. It was the breath of Ramakrishna, breaking down the barriers through the mouth of his great disciple. The Parliament of Religions gave the young orator an ovation.” 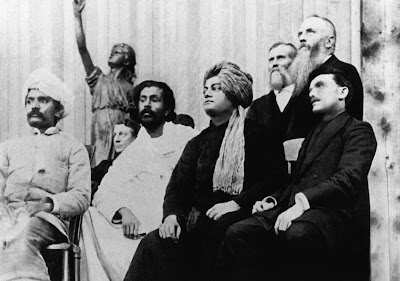 It is essential, in order to understand and appreciate the mission and work of Swami Vivekananda, to understand the vision and ideology of Shri Ramakrishna Paramahamsa. Shri Ramakrishna, says Swami Nirvedananda, was the Ganga of Hindu Dharma, contained in his self-realization at the personal level. It was left to Vivekananda to act as the mythical Bhagiratha and spread this divine river across the continents.

The mission of Swami Vivekananda was not an easy one. He had formidable challenges before him. He had to awaken the Indian society from its slumber of centuries. A large mass of the population of his country was ignorant of her rich cultural and spiritual heritage. In their total apathy to their Indianness, they did not realize that there were certain essential ingredients in our ancient culture which we could ignore only at our peril as a nation. There was another class of people who were indeed ashamed of their being Indians and prided themselves in aping the western way of line. There was yet another section which, in spite of being fully aware of the richness and relevance of our legacy, could not muster enough courage and expound it either through words or in deeds.

Another set of people was economically distressed and socially downtrodden and mired in its material problems, did not have either the time or the opportunity to think about culture, philosophy or spiritualism. The first and foremost task before Vivekananda was to reinterpret the Indian cultural values before his countrymen in a language and style which they could comprehend, relate to and feel proud of “Civilisations”, he said, “have arisen in other parts of the world. In ancient times and in modern times, great ideas have emanated from strong and great races…but mark you, my friends, it has always been with the blast of war trumpets and with the march of embattled cohorts. Each idea had to be soaked in a deluge of blood…but India has for thousands of years peacefully existed. Here activity prevailed when even Greece did not exist when Rome was not thought of….Even earlier, when history has no record, and tradition dares not peer into the gloom of that intense past, even from then until now, ideas after ideas have marched out from, her, but every word has been spoken with a blessing behind it and peace before it…..” 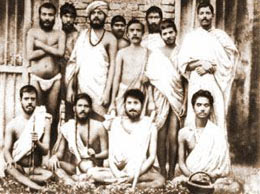 The second task before him was to inspire our countrymen out of their poverty, misery, helplessness and fatalistic attitude and instill in them the will to work and be materially self-reliant. He knew full well that to talk of religion to a poor and weak people is to make a mockery of both, religion as well as the people. “My heart is too full to express my feelings. So long as the millions live in hunger and ignorance, I hold every man a traitor who, having been educated at their expense, pays not the least heed to them.”

Swamiji wanted his countrymen to be strong not in will alone but physically too. “Heaven”, he declared, “is nearer through football than through the Gita. We want men of strong biceps”. The third task he undertook to do was to carry the message of India’s greatness, her religion, her philosophy and her culture across the Indian ocean; right in the heart of the USA where a whole new world of material prosperity was getting ready to take under its wings the materially and economically less advanced nations, and Europe, which in her imperial might continued to look down upon the less powerful races as barbarians and uncivilized. No doubt, Vivekananda had to go through a lot of trouble, and difficulties to achieve this objective. But, as Romain Rolland recalls, “The unknown of yesterday, the beggar, the man despised for his color by a mob wherein the dregs of more than half a dozen of the peoples of the world met – at the first glance was to impose his sovereign genius…in this first hour of dawning glory – of the rising sun – the brightness of its light extinguished the shadows. Vivekananda became the man of the hour.”

Apart from his wisdom, scholarship and dedication to his mission, what also helped Vivekananda in accomplishing his objective was his personality, which immediately attracted attention, coupled with the most eloquent oratorical skills. Vivekananda was a great speaker, Swami Vivekananda Thoughts penetrated the innermost depths of his audience whom he kept spellbound. It is difficult today to appreciate the formidable challenge which Swamiji faced and the courage of conviction with which he could thus speak in the midst of the Christian missionaries as he stood among those who considered themselves to be the natural masters. Holiness and purity and charity are not the exclusive possessions of any church in the world, and every system has produced men and women of the most exalted character….Upon the banner of every religion will soon be written in spite of….resistance, ‘Help and not Fight’, ‘Assimilation and not Destruction’. ‘Harmony and Peace and not Dissension’.

And Vivekananda Spoke this, too, to his Countrymen

“This national ship has been ferrying millions and millions of souls across the water of life. For scores of shining centuries it has been plying across this water, and through its agency, millions of souls have been taken to the other shore, to blessedness. But today, perhaps through your own fault, this boat has become a little damaged, has sprung a leak….Let us go and stop the holes. Let us gladly do it with our hearts’ blood; and if we cannot, then let us die. We will make a plug of our brains and put them into the ship, but condemn it never. Say not one harsh word against this society. I love it for its greatness. I love you all because you are the children of gods and because you are the children of glorious forefathers….All blessings be upon you!” Amen !!!

AND So was the Swami Vivekananda Thoughts, the luminous saint of India of 19th centuries.