India is a country of Gods and Goddesses. People here are highly spiritual and everywhere you may witness temples. There are many Famous Temples in India of high historical importance.

India is known for its spirituality. It has to lead the world since the time immemorial in the field of Spirituality and Yogic Kriyas. It has been the place of the oldest religion of the world which is said to be NOT MAN MADE and which is known as ‘Sanatana Dharma’. People also call India as the country of Gods and Goddesses and perhaps in this background that there are an innumerable number of temples in this country. In view of the above, therefore here I am going to deliberate upon Top 5 Famous Temples in India which are not only the center of religious echelons but which also represent the magnanimity of development, wisdom, peace, and grandness. 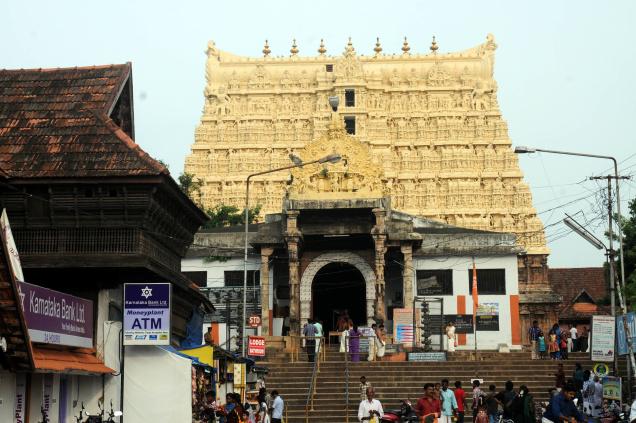 In recent times, this temple has been in news for its oldest and preserved treasures which are accounted in terms of billions of dollars. This temple is perhaps the richest temple of India and its full-scale wealth is not yet known to the public as well as even the government. This Famous Temple of India is well protected in terms of its security and preservation of treasury. This temple is said to be one of the oldest and famous temples in India which has been in the forefront in preserving its culture, ethos, and Hinduism. The Temple is so old that it has been referred in several Epics and Puranas. Srimad Bhagavatha connotes that the elder brother of Lord Krishna Balarama visited this Temple and took bath in Padmatheertham to make several offerings. There is no precise date which can be claimed about the timings when the temple was built. But as per the works of the famous historians like late Dr. L.A.Ravi Varma of Travancore express that the Temple was built on the first day of Kali Yuga which is some what over 5000 years ago.

When someone enters the gate of the temple, you will find the proclamation that only those who follow the faith of Hinduism are entitled to enter the shrine. There are specific dress codes, which everyone religiously follows to secure and be in the premises of this one of the famous temples in India. Once you are inside the temple, you can visualize the principle deity Lord Vishnu in his “Anantha Shayanam” posture. This posture is said to be the eternal yogic sleep on the serpent Adi Sheshnaag . 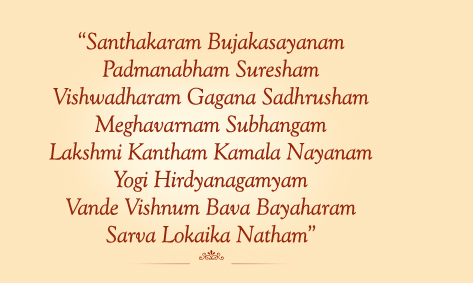 In the modern age of holy deity Darshanam one can avail the facility of On Line Puja and On Line Darshanam . and thereby presenting the offering to the almighty god even being away thousand of miles from the temple shrine. 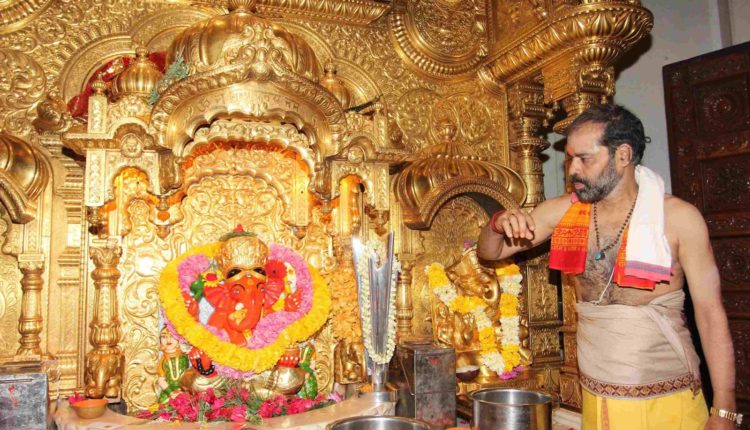 In the minds and hearts of every Mumbaikar irrespective of caste, creed and the religion reside Shri Siddhivinayak Ji. Though Lord Ganesha remains at the fore front of any Puja or offerings in Hinduism and every Hindu adore and pray him, Maharashtrians and more famously the people of Mumbai does have profound Bhakti in his/ her Siddhivinayakam.

Shri Siddhivinayak Temple of Mumbai is located in Prabhadevi and is one of the most worshiped temples of India. Lord Ganesha, the Elephant God, adore the temple and is profoundly worshiped by its Bhakta. This one of the famous temples in India was constructed by Vithu and Deubai Patil in the year 1801. Today Shree Siddhivinayak Ganapati temple is visited and adored by the people of all the sects and the society.

In terms of its spirituality and temple wealth, this temple is perhaps wealthier and at the second spot after Padmanabhaswamy Temple, Trivandrum. The temple is visited by the VIP dignitaries most often but within the temple premises every one is treated with same yard sticks and there is no one VIP, rich or poor.

If you are far away from Mumbai and find it really difficult to visit the temple, you can utilize facilities of On Line Darshanam . 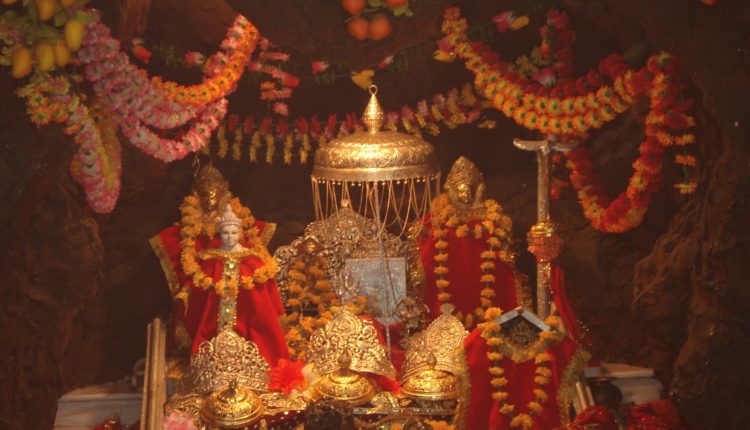 As it is rightly said that if you are Hindu and believes in Hindu spiritual traditions at least once in your lifetime you should visit Maa Vaishno Devi for her eternal blessings. Hinduism spiritually prescribes you to perform Dharm (Righteousness), Arth (Material Pursuits), Kaam (Contentment) and Moksha (Enlightenment) in your life. Maa Vaishno enlighten you to practice this tradition sheer by her visit to the place. One may not believe it, but on visiting this place many may agree with this sermon. The panoramic surroundings of the temple which is placed in the Trikuta Mountainous surroundings and the enchanting journey to the place will fill your hearts with a memorable experience of PEACE.

There are many famous stories about Maa Vaishno Devi and in one such story connotes about how the shrine was discovered. It says that about 700 years back, one of the profound devotees of Mata, Pandit Shridhar went on an indefinite fast, because Mata was no longer visiting him. According to the popular belief, Mata then came into his dreams and guided him to search her at the caves in the Trikuta Mountain. This led to the discovery of the holy cave. Pandit Shridhar launched a big search for her and at last found three heads atop a rock inside a cave. These heads came to be known as the Holy Pindies and are since then been worshiped at this famous temples in India.

For live Darshanam, one can visit this one of the famous temples in India at the Shri Mata Vaishno Devi Shrine Board Official Website. 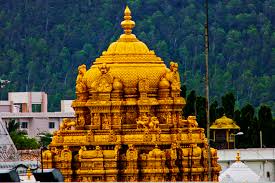 Sri Venkateswara Swamy temple is one of the oldest and famous temples in India whose history and existence can be traced back to the antiquity of even 9th centuries. The older dynasties like the Cholas of Thanjavur, the Pandyas of Madurai, and the kings and chieftains of Vijayanagar of 14th – 15th century AD, all of them were devotees of the Lord as per the available literature. This amply satisfies the ancient grandeur of this old shrine. Lord Sri Venkatachala Mahatmya is found to be referred in several Puranaslike Varaha Purana and the Bhavishyottara Purana.

Online live Darshanam can be acquired by visiting this one of the famous temples in India on its Tirumala Tirupati Devasthanams website. 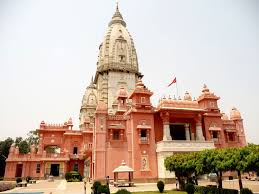 Kashi Vishwanath Temple is one of the famous Jyotirlingam which is located in Varanasi, in ancient epics known as Kashi. The history of building the city is antique in itself and very famously recalled by shrine descriptions. It is said that two rivers named as ‘Varana’ and ‘Asi’ met the Ganges at this place, therefore the name ‘Varanasi’ was given to this place. Also that a tribe named ‘Kasha’ resided in this area on the Ganges banks and hence the name came ‘Kashi’. The flow course of river Ganges in this area is in the shape of a bow which is regarded very pious and there are enough descriptions of the episodes in our epic books. Because of the purity of the place in the Puranas Kashi has been known as the place to attain Moksha or Salvation. The story goes onto say that anyone be it men, women, old, child, sinner, pure, impure, Ashur who dies here straightway attain salvation, because the place is blessed with so much of positive energy or ‘Punya Karma’ and is the permanent abode of ‘Devadhipati’ Lord Shiva.

One of the famous temples in India, the temple of Kashi became the eyesore of Muslim invaders and they tried their best to destroy all the temples in the area and in a place built Masjids in and around the places. It was the dedication and constant flow of devotees from in and around various places of ‘Bharat’ that kept up the flames burning and the place is known and worshiped as the ‘Jyotir Lingam Peeth’.

Kashi Vishwanath Temple is said to be built during 1777 Ad by Ahalya Devi Holkar and was further renovated by the king of Kashi during 1785 who also built several other temples in and around the areas. Famous Kalbhairav temple in Varanasi was built by Srimant Baji Rao Peshwa in 1852 AD. King Ranjit Singh from Punjab got the tomb of Kashi Vishwanath temple covered with gold plates and later on the king of Nepal fitted a huge bell which hangs in the temple premises. Surrounding areas of Varanasi famously known as Saranath was developed and built by Buddhist monks and several stups came up in the area further enhancing the importance of the famous Kashi Vishwanath Temple, Varanasi.

There are though many many more famous temples in India but here in this article, we have tried to talk and deliberate upon only the Top 5 most Famous and astounding Temples of India. Hope we have been successful in our endeavor.

Types of Rudraksha and its Benefits: A Critical Study