Historical Perspective of Vedic Mantras from Vedas and Upanishads

Vedic Mantras represent the essence of Vedas and Upanishads and its power to cure various maladies of individuals and the society.

Deliberation of the subject Vedic Mantras from Vedas and Upanishads bring about talks on the golden age of ancient India which hovers around Vedic Age.

The Vedic Age is an integral part of Sanatana Dharma. Here please remember ‘Dharma’ does not mean any religion or ritualistic book to look forward to any guidance but it was essentially the way of life.

The Vedic Age, however, can be credited to give rise to the emergence of the ancient religion of Hinduism which drew much of its rituals and beliefs from the Sanatana Dharma. Vedic Mantras during this period had gained much more prominence.

The Vedic Age can be estimated to spread from around 1500 BC to 500 BC. This was the period which coincides with the period of Aryan migration to Gangetic planes which occurred towards the end phases of Indus Vally civilization or the famous so called Bronze Age civilization.

The north-east Afghanistan to Pakistan and towards north-west India was the main scene of action of all these episodes. 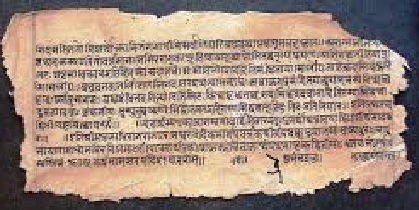 The Aryans migrated to the Gangetic planes. The area was in the dominance of semi-nomadic tribal people and jungle men at that time. They were still leading a naturalistic obscure life.

Migration of Aryans and their amalgamation with the locals brought about a mixture of holistic life with nature. The Aryans were master of an Indo-European language which was later known as Sanskrit. They recited Vedic Mantras and used it to find a cure for various remedies.

Aryan brought with them the religion based worship of gods and goddesses which were performed with the oral pronunciation of hymns, prayers, chants, and commentaries in the form of Vedic Mantras. The collection of this oral pronunciation of poetry’s and proses were later on collectively called as the Vedas and Upanishads.

The composition of Vedas in written form started from the time of the Aryan entry to India and continued through centuries, during the whole span of Vedic Age and even beyond.

Faithful transmission of the Sutras, Vedic Mantras, Chants through the medium of word-of-mouth from generation to generation and then somewhere in written form constituted the writing of Vedas in various forms.

The Aryan belief system that the Vedas greatly reflect can be found related to other Indo-European people of the ancient world like Greeks and the Germans.

The indigenous practices and concepts slowly overtook the life styles and ethnicity of the people and new theories of relevance like ‘Reincarnation’ and ‘Life after Death’ took prominence in the practices. Vedic Mantras gained momentum in daily practices.

Inscription of Vedas in written form continued even during the most turbulent periods of wars, settlement, migrations, and resettlement. On research one may find a glimpse of such occurrences even during the period of “Mahabharata”, where such epics were being written and pronounced.

The Great literary form of works can be found in the form of ‘The Upanishads” which were written mainly towards the end of the Vedic Age. Here too the Vedic Mantras continued its prominence in the daily life of individuals.

Originally written in Vedas in the form of commentaries, These verses were slowly separated and were indexed as ‘Upanishads’.

The Upanishads consists of around 200 sections of prose and poetry which primarily deal with the material world. It basically talks about desire, and presumes that desire is the cause of various sufferings in the human life.

The life cycle of Birth-Death-Rebirth is deliberated in details in Upanishads. It uses Vedic Mantras to achieve ultimate freedom or “Mokchha” from the life cycle by practicing it.

The prominence of Brahma as The Creator, Vishnu as The Preserver and Shiva as the Destroyer has been talked in detail in Upanishads. These ideas were indigenous to the Indian sub continent and these philosophies bore a profound effect on the social life of the population.

The notion that all creations of the god i.e Lord Brahma have a life, be it humans, animals, plants, aquatic life and even the solid rocks, and they all should be treated with compassion, love, and respect.

In all these scenarios, the Vedic Mantras always played an important part.
MantrasUpanishadsVedasVedas and UpanishadsVedic Mantras
0
Share FacebookTwitterGoogle+ReddItWhatsAppPinterestEmail

Why Western Women Converting to Hinduism