Do you know that Chess Board as a game has originated from India? If you have any doubt, let us trace the history of Chess.

The precursors of chess board originated in India during the Gupta Empire, Its early form in the 6th century was known as Chaturaṅga, which means “four divisions (of the military)”: infantry, cavalry, elephantry, and Chariotry, all represented by the pieces that would evolve into the modern pawn, knight, bishop, and rook, respectively.

The Chess Board history connotes that Chess was first introduced to Persia from India and became a part of the princely or courtly education of Persian nobility.

In Sassanid Persia, around 600, the name of  Chess Board became Chatrang, which subsequently evolved as Shatranj.

The Arab Muslims lack pronunciation of ch and ng native sounds and therefore the rules were developed further as per the convenience.

Players started calling “Shāh!” (Persian for “King!”) When attacking the opponent’s king, and “Shāh Māt!” (Persian for “the king is helpless” – see checkmate) When the king was attacked and could not escape from attack.

These exclamations persisted in chess as it traveled to other lands.

Recommended for You:
Impact Of Western Culture In India: A Critical Analysis
Hindu Vedic Mantras: Ancient Spell From Vedas And Upanishads 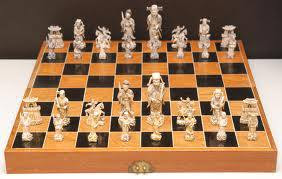 Unmasking of Chess Board History

The Chess Board game was taken up by the Muslim world after the Islamic conquest of Persia, with the pieces largely keeping their Persian names.

The Moors of North Africa rendered Persian “Shatranj” as shaṭerej, which gave rise to the Spanish acedrex, The Axedrez and Ajedrez; in Portuguese, became Xadrez, and in Greek Zatrikion, but in the rest of Europe it was replaced by versions of the Persian shāh (“king”).

Thus, the Chess Board game came to be called Ludus Scacchorum or Scacc(h)i in Latin,  Scacchi in Italian, Escacs in Catalan, Echecs in French (Old French Eschecs); Schaken in Dutch, Schach in German, Szachy in Polish, Sahs in Latvian, Skak in Danish, Sjakk in Norwegian, Schack in Swedish, Sakki in Finnish, Sah in South Slavic languages, Sakk in Hungarian and Sah in Romanian.

There are two theories about why this change happened:

The form of the chess board, which finally arrived in Europe was already being played in Persia some 1,350 years ago. When that area of the world was conquered by Muslim armies in the mid 7th century, they brought this game.

The game of chess board became very popular in the Muslim world, and it was carried back, throughout Islam, across North Africa and eventually into Europe.

On close observation, one could find that the ancient game which was played in India, was very similar to the chess board game we play today in terms of strategy and the objective. But this game did not have the powerful and quickly developing moves of the pawn’s double push, the bishop’s long angle, and especially, the all-powerful queen of the modern chess.

From its mysterious beginning, somewhere in the heart of Asia, from India, chess board has spread today to east, west, north, and south.

This signifies the history of the chess board that it originated from India and is now a proven fact.

When did Hinduism Begin: History Says Hindus Lived 74000 Years Ago

Traditional Medicinals System in India: All Natural Herbs and Plants