Why was this finding NOT propagated around the World? OR Was it just a rumor ??

It is a well-known fact that Vimana Shastra was a rich document for manufacturing of Aircraft. In recent times a Vimana found in Afghanistan has attracted a lot of media attraction. What is the truth behind all these developments?

In the modern age, very few people are interested in the profound history of ancient India and its golden period. A big chunk of people who have no interest in the historical generousness of India, reject the very existence of Mahabharata period and call it just a  figment of the imagination.

The news about the existence of a Vimana is now a slap in the face of such people and a warning that they should STOP twisting the history as per their wish and deeds.

The news says that A Vimana has been found in a cave in Afghanistan. The story continues saying that when a group of soldiers on a mission of search and destroy Taliban militant discovered a cave where as per the report found a 5,000 years old Vimana.

When 8 U.S marines from the group approached the Vimana and tried to fiddle, its time machine started and caused all the 8 soldiers to vanish.

Soon this report was flashed to appropriate authorities and there was a follow-up rush from the American scientists, and a few big dignitaries from the USA, Russia and other countries, who visited the site secretly.

It is said that a very powerful electromagnetic field exists around the Vimana found in Afghanistan, which prohibits any individual to extract it from the site. 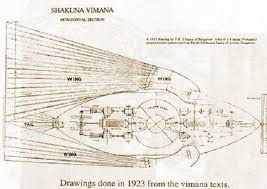 If one goes through the epic of Mahabharata, you will come across the description, which states that there was a Vimana which measured 12 cubits in circumference with 4 big wheels. When this machine is operated, it throws a very intense light. When this shaft of light is pointed onto the target, it then consumes it with its power.

The Vimana found in Afghanistan is also nick named as a flying machine is said to be protected by the energy barrier which prevents the troop to remove it.

In this regard, observations made by Professor Kanjilal on ‘Matsypurana’ is worth mentioning here, which throws some light on the subject.

…. Three flying-cities were made for and were used by the Demons…One was in a stationary orbit in the sky, another moving in the sky and one was permanently stationed on the ground. These were docked like modern spaceships in the sky…and at a fixed latitude/longitude. Siva’s arrow obviously referred to a blazing missile fired from a satellite specially built for the purpose…Vestiges of one time prosperous civilization destroyed in battles flicker through these legends …..”

The above quote depicts the existence of Vimana during the said period.

There are also rumors about a Russian SVR report which mentions that when trained soldiers along with their German Shepherd dogs visited the place and tried to extradite the Vimana found in Afghanistan, they faced with most dangerous electromagnetic shockwave which severely affected the 40 soldiers and their dogs. The effort to remove the machine was abandoned.